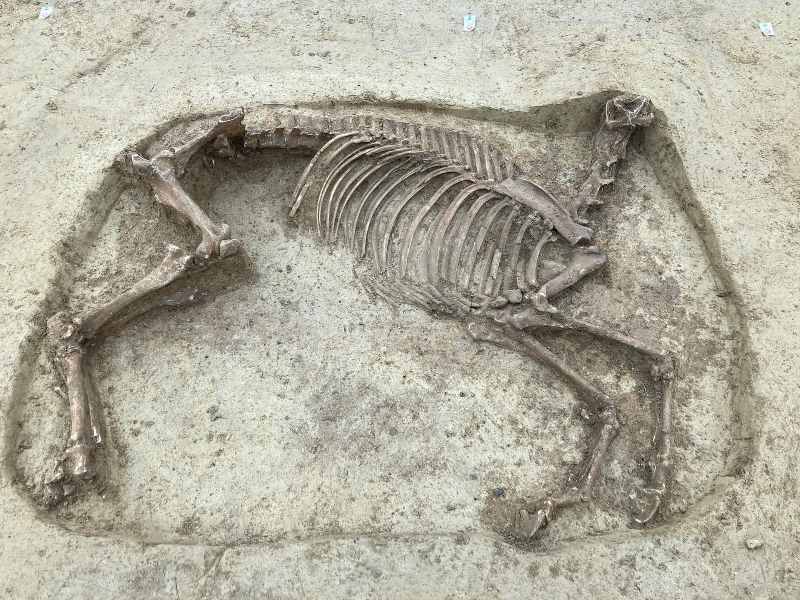 The decapitated skeleton of a horse was found buried next to its rider in a cemetery in southwest Germany where nobles and elite Merovingian warriors lie.

Archaeologists combed a site around the town of Knittlingen, where graves have been identified, including Merovingian nobles and warriors.

The Merovingian dynasty ruled over the Frankish people from the mid-5th century until 751.

The fertile area around the city was colonized from the Neolithic to the Middle Ages, with several burial fields identified. The main burial dates from around the 7th century.

Graves were first discovered in the area in 1920, a little west of the heart of Knittlingen, during the construction of a railway line which was never completed. Further work was carried out in 1984.

From now on, the residential development plans for the area have given rise to new archaeological investigations of the site, carried out by the commissioned company ArchaeoBW.

The State Office for the Preservation of Monuments (LAD) of the Stuttgart Regional Council also took care of one of the burial fields as part of an archaeological excavation.

LAD’s Dr Folke Damminger said investigations have revealed Stone Age relics in pits. “The few ceramic fragments that have been recovered indicate a Neolithic era, around 5000 to 4500 BC.”

However, the focus has been on early medieval burials, with around 110 graves discovered and documented. They were mostly arranged in more or less regular rows.

Members of the local elite were sometimes buried “out of order” in a circular ditch.

Funeral structures ranged from simple burials to wooden burial chambers. Only vestiges of the wood remain. Some were buried in wooden coffins.

The deceased were buried in their traditional costumes according to the custom of the High Middle Ages.

Although burial sites were often looted in the early Middle Ages, many non-organic jewelry components such as pearl necklaces, clasps, earrings and arm rings as well as hangers with discs decorative, everyday utensils (knives, combs) and amulets were recovered from the graves of women and girls.

Parts of the weaponry equipment – swords, spears, shields and arrowheads – as well as the associated belts, come from male graves.

Ceramic vessels have been added to graves regardless of the gender or age of the dead. They probably contained food. These could be detected directly in the form of animal bones and eggshells.

Despite the work of grave robbers, the findings provide clues to the social status of the dead, Damminger said.

Of particular note were the relatively rich burials from the second half of the 6th century.

A woman was buried in an almost complete outfit typical of the time. In another tomb, a gold disc brooch worn individually from a slightly younger tomb announces the fashion of the 7th century.

Some of the men’s graves identified the deceased as horsemen. A decapitated horse was buried near one of these graves. Bronze bowls found in some tombs bear witness to nobility.

The accessory sets from the end of the 7th century, on the other hand, appeared a little more modest. Whether this is a decline in prosperity or a change in the staging of the funeral of local elites is unclear.

The skeletons as well as the other finds were transferred to the central archives of Rastatt. The excavation is expected to be completed in the northern spring of this year.