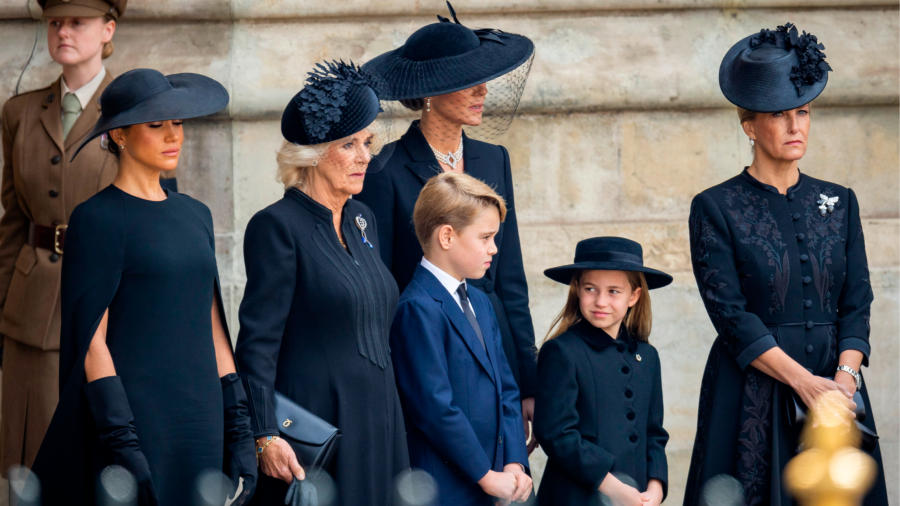 Black, navy blue and pearls: how the royal family dressed to mourn the queen

Just two days before her death, Queen Elizabeth II was photographed at Balmoral Castle in what would be her last official engagement. The 96-year-old monarch dressed in her laid-back country look to meet Liz Truss, her 15th prime minister, and stood before a blazing fire in a gray cardigan and pleated skirt.

It was a representation that looked more like a dear and sweet grandmother than a resplendent sovereign. And it wasn’t meant to be the final image of Her Majesty. She was, after all, the woman who had spent seven decades on the throne — and even longer in the public eye — embracing the power of fashion and the messages clothes could send. Buckingham Palace released a never-before-seen portrait on Sunday, just in time to fill Monday’s front pages and direct its visual legacy back to where it belongs.

The photograph, taken a few months earlier to commemorate her platinum jubilee, shows the Queen in a light blue dress against a gold patterned background. The most notable feature is her smile, true and strong, accessorized with three strands of pearls and a pair of aquamarine brooches her parents gave her on her 18th birthday. Here she is not weighed down by the glamor and burden of full sovereign regalia, nor is she wearing a ball gown and tiara, as she was in so many early photographs that resurfaced after her death. This is an image of Elizabeth II, the majestic steward, offering a softer and more stable idea of ​​power.

And it was in this spirit that her family dressed for their farewell. Ten days of mourning, and all correct without being flashy. Perhaps the most talked about fashion moment was seven-year-old Princess Charlotte wearing a hat for the first time in an official capacity, the wide brim and bow tails reminiscent of the character from the book of Madeline tales.

Since the Queen’s death on September 8, Windsor brides have stuck to black with a thoroughness that would have done Queen Victoria proud.

But the gentlemen, especially the latest occupant of the throne and the next couple, diverged ever so slightly with their chosen shades. King Charles III made his first appearance as sovereign just a day after his mother’s death in a costume that had royal watchers wondering if he was black or not. Prince William gave a more conclusive answer to this question by standing next to his wife Catherine’s all-black ensembles – definitely navy blue. The same goes for nine-year-old Prince George, who stood out at his great-grandmother’s funeral in a navy suit.

Within the confines of all black, the princess used silhouettes and styling to show a range from simple to majestic

The departure of the heirs was mostly without comment, but former Prime Minister David Cameron was not so lucky. The media, from the Telegraph to Twitter, criticized him for holding the Membership Council on September 10. “The former prime minister wore a navy suit and light blue shirt for the grim Membership Council meeting,” read an article in The Telegraph, “although the nation is in a period of mourning for the Queen Elizabeth II, died Thursday at the age of 96.

Does the entry of navy blue into the mourning fashion equation signal a new, more casual chapter for the famously formal royals? It could very well – it’s a theme that seems to work well in King Charles’ stated hopes for a lean and enduring monarchy.

But even the senior royal who gets the most fashion attention, Catherine, the new Princess of Wales, has kept her clothes rather understated for the past 10 days. She relied on her long-standing trio of trusted British brands: Alexander McQueen, Catherine Walker and Jenny Packham.

Within the confines of all-black, the Princess used silhouettes and style to show a range, from a simple long-sleeved dress for Windsor’s first walkabout to a rather stately full-skirted coat dress and tall hat veiled for the state funeral. In between, she again wore a pair of Catherine Walker pieces, two striking coats – one military-inspired, the other with an oversized bow – first seen, respectively, on Remembrance Day in 2020 and Prince Philip’s funeral last year.

Another way Catherine made the time of mourning feel more familiar was to wear black versions of previously seen styles. Her dress for Monday’s state funeral appeared to be a remake of a white Alexander McQueen dress she had worn twice before, including on the balcony of Buckingham Palace in June to celebrate the Queen’s Platinum Jubilee.

Meghan, Duchess of Sussex, took a similar approach to her funeral attire. Her black cape dress almost looked like a navy blue Stella McCartney style she wore in 2018 to celebrate the Queen’s 92nd birthday. And Meghan’s hat appeared to be the same style she chose for the thanksgiving service during the monarch’s Jubilee celebrations. Seeing these similar styles, once worn to celebrate and now rendered in black for mourning, served as a poignant endnote.

Both women relied heavily on pearls, a favorite of Queen Elizabeth. With three strands of pearls at two different engagements, Catherine wore the Queen’s pearl earrings and choker for Monday’s funeral – the same combination she wore in Prince Philip’s service in 2021. Meghan wore a pair of pearl earrings given to her by the Queen in 2018. Young Charlotte also received the jewelery tribute memo, sporting a small diamond horseshoe brooch which was a gift from the Queen.

Amid the sea of ​​black vestments pouring into Westminster Abbey on Monday for the funeral service, one had to look closely at the details to discern any further nods. Queen Consort Camilla chose a heart-shaped brooch and carried a Launer handbag, the Queen’s most seen bag. Sophie, Countess of Wessex, wore a bespoke Suzannah London coat dress embroidered with lily of the valley, considered the Queen’s favorite flower. Her daughter and equestrian enthusiast (much to her grandmother’s delight) Lady Louise Windsor wore a delicate necklace in the shape of a horse’s head.

There was nothing understated about the decorations atop the Queen’s coffin throughout the funeral. When the motorcade emerged from Westminster Hall on Monday, the coffin was draped in the Royal Standard and topped with the glittering Imperial State Crown as it had been all week.

However, the white bouquet that had featured prominently during the makeover had been replaced with a bright pink and dark burgundy assortment. The thoughtful compilation, created at the request of the new king and cut from the gardens of the royal residences, included rosemary, English oak and myrtle which had been cut from a plant grown from myrtle in the Queen’s wedding bouquet .

The flowers served as a beacon as the procession made its way through the crowded streets of London and, later, through Windsor towards the castle. At St. George’s Chapel, the crown, scepter and orb were removed from the coffin and placed on the altar. But the vibrant bouquet remained, a fitting final adornment for a woman who lived to be seen.

Elizabeth Holmes is the author of ‘HRH: So Many Thoughts on Royal Style’ (Celadon Books, 2020)