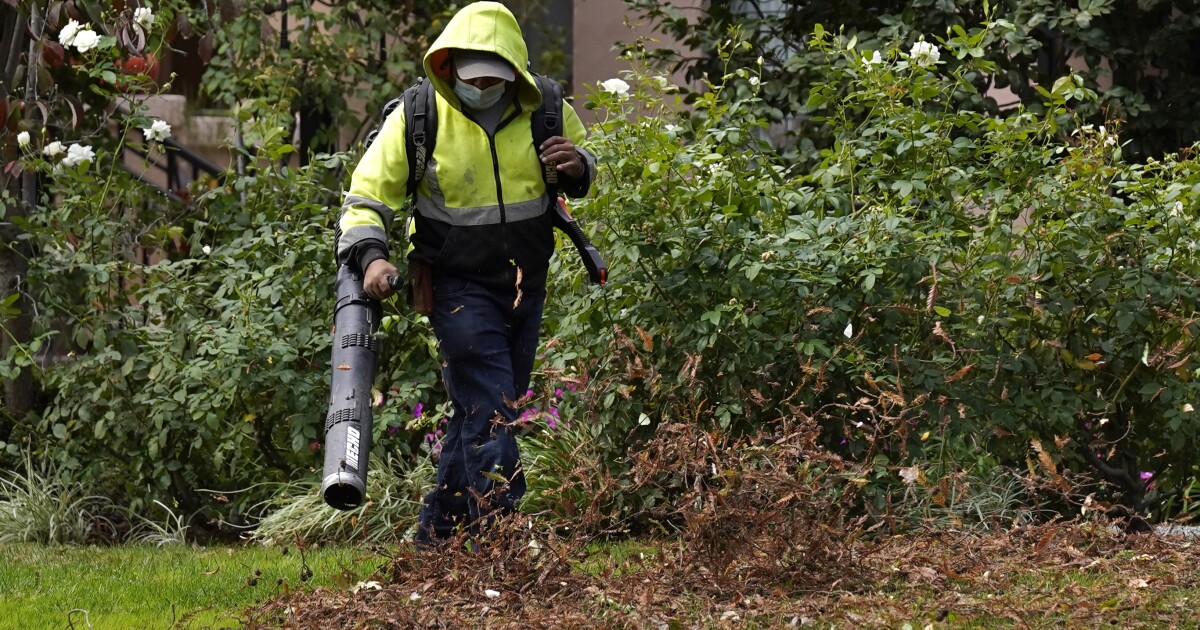 California regulators voted Thursday to ban the sale of new gasoline-powered leaf blowers and lawn mowers from 2024 and portable generators by 2028, the latest step in the state’s aggressive efforts to reduce harmful pollutants and move to a carbon-free economy.

The agency’s decision is based in part on the belief that battery technology will improve and zero-emission equipment will become more widely available before the requirements apply – although there is a annual review to determine if they are in the right direction and if regulations need to be changed or delayed.

The restriction applies to homeowners and commercial landscapers, and the ban also includes gasoline-powered trimmers, chainsaws and pressure washers. However, the regulation does not prohibit existing gas-powered equipment, which can continue to be used.

Combined, these small gasoline engines create as much smog-causing pollution in California as light passenger cars. There are about 15.4 million small all-terrain engines in California and they produce about 141 tonnes of smog-forming emissions per day, according to the agency.

Richard Corey, the agency’s executive director, told the board that the ban will bring significant health benefits to Californians, including those in low-income neighborhoods and communities of color, who tend to be most exposed to pollutants.

Environmental and public health advocates have praised the new regulations, saying the transition to zero-emission landscaping equipment and generators – battery-powered or plug-in – will not only reduce pollution , but will protect the health of landscaping workers, homeowners and tenants who are exposed to gas and oil fumes.

â€œNew sales will start to make this transition to much cleaner, quieter equipment,â€ said Bill Magavern of the Coalition for Clean Air. “This is going to be a major improvement for the health of the workers who use the equipment and for the residents who are exposed, as well as for everyone in the area, because smog is really a regional problem.”

Agency staff told the board that the transition to zero-emission machines will result in an additional upfront cost for landscapers, which will be offset by the money they save on fuel, maintenance and repairs. . Reducing emissions will also prevent hundreds of premature deaths in the decades to come, as well as lower healthcare costs for those affected by carbon emissions, they said.

Landscaping companies have been adamantly opposed to the new restrictions, saying zero-emission commercial-grade equipment is prohibitive and less efficient than existing lawn mowers, leaf blowers and other small gasoline-powered machines used in the industry. . According to an industry representative, a three-person landscaping crew would need to carry 30 to 40 fully charged batteries to power their equipment for a full day’s work.

â€œThe cost of the transition would be significant and would likely kill my small business,â€ Elizabeth Burns, president of Zone 24 Landscaping in Torrance, told the board.

Hector De La Torre, member of the Air Resources Board, said that when the agency sets ambitious goals, as in this case, “99% of the time we get there”. If there are any problems in the future, however, the board will stop the process and reassess the situation.

â€œWe are not blind to the realities of what is happening in the market,â€ he said.

The Air Resources Board began work on the regulations after Governor Gavin Newsom issued an executive order in September 2020 requiring the state to “switch to 100% zero-emission all-terrain vehicles and equipment by 2035, to the extent possible “, which includes landscaping equipment. and portable generators.

In October, Newsom signed a law enshrining this policy in state law.

Assembly member Marc Berman (D-Menlo Park), author of the legislation, said the state has set aside $ 30 million to help landscapers and professional gardeners transition from equipment gasoline to zero emission equipment. Berman and members of the Air Resources Board agree that more money will be needed in the future, especially for smaller landscaping companies.

Dave Johnston, the air pollution control officer at the El Dorado County Air Quality Management District, expressed concern about the impact on residents of rural areas. Portable gasoline generators are essential for many Californians, especially those who live in areas affected by widespread blackouts when high winds sweep the state, primarily because utilities are trying to prevent a failed power line from running out. start a fire.

“Power outages in rural areas are frequent and can last for several days and are becoming increasingly common,” he told the board, asking it to delay the ban. â€œForcing middle- to low-income rural residents to go without electricity for long periods of time to achieve small emission reductions in these areas that are already on track is unreasonable. “

Recreational vehicle manufacturers and dealers have also urged the board to rethink the generator ban. They said RV users depend on gasoline generators, which are often permanently fitted, while in remote areas without access to electricity. Solar-powered equipment cannot provide the energy needed to run medical devices, refrigerators and air conditioning in hot climates, they said.

â€œThe battery required to supply the power needed by a motorhome for a single day would have to be double the size of a battery currently used in a Tesla Model S and cost over $ 60,000 to $ 100,000, and would add at least 1,000 to 2,000 pounds. to a vehicle, which decreases its fuel consumption, â€said Michael Ochs of the Recreational Vehicle Industry Assn.

Dealers told the council the ban would force Californians to purchase recreational vehicles in neighboring states where gasoline generators are allowed, which would cost jobs and do nothing to improve air quality.

Agency officials said those concerns will be assessed before the new regulations are implemented.

The new regulations come as California moves towards the goal of transitioning to 100% clean energy by 2045, shedding its dependence on gasoline cars and phasing out the billion-dollar oil and gas industry. government dollars.

In the same 2019 executive order banning leaf blowers and gasoline-powered lawn mowers, Newsom demanded that all new cars sold be zero-emission vehicles by 2035. In April, Newsom took action to ban new hydraulic fracturing permits starting in 2024, and in October took the first step towards banning new oil and gas wells within 3,200 feet of homes, schools and healthcare facilities.