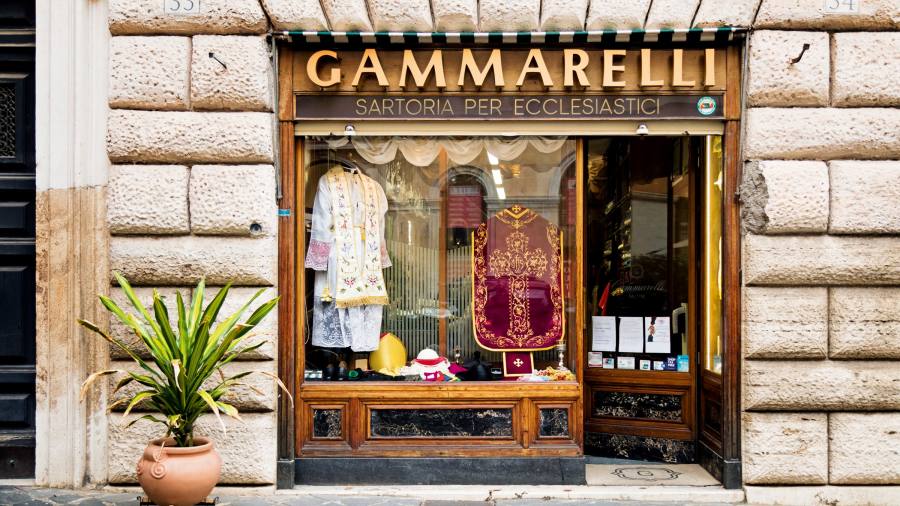 Cult Shop: for socks worthy of a pope

Tailor shop for ecclesiastics, since 1798 reads the header on the homepage of Ditta Annibale Gammarelli, the Roman house which provided liturgical vestments to priests, cardinals, bishops and all but one pope since the beginning of the 20th century. If the website looks like a relic from another era, so does Gammarelli’s brick-and-mortar location, hidden in Piazza di Santa Chiara just behind the Pantheon, where he traded from the same unpretentious showcase since 1874.

Of all the ecclesiastical Sartorialists in the Eternal City – many of whom line the streets surrounding Santa Chiara, making the area a sort of Mayfair of great church garments – Gammarelli is probably the best known; it was certainly the most popular with the Office of the Holy Father. (The one outlier, Pius XII, “only had his first three garments made,” notes co-owner Massimiliano Gammarelli. “He already had a personal tailor that he liked a lot – so, you know.”) With only a handful of others, it has also achieved a degree of popularity with secular taste makers of the world. Since Giovanni Antonio Gammarelli founded the boutique at the end of the 18th century, six generations have carried on the tradition. Today, Massimiliano, together with his cousins â€‹â€‹Stefano Paolo and Lorenzo, oversees the production of cassocks and capes, albs and scapulars, mozzettas, surplices and bolsters (most of the clothes are made by hand. ). â€œWe have a clientele that comes from everywhere,â€ notes Massimiliano.

Inside, along two walls, floor-to-ceiling shelves house bolts of fabric – cottons and silks in rich reds and purples, and brocades adorned with metallic threads, almost all still produced in Italy. . Rolls of fringes and braids are neatly arranged next to it. In the two small rooms of the shop, portraits of former pontiffs are hung or placed on tables and cupboards. Long black priest’s cassocks, their collars and buttons (33 of them, one for each year of the life of Christ) covered with fluffy velvet, hang from hooks; display cases contain crucifixes and bishop’s rings studded with amethysts and topazes, as well as an array of richly inlays gemelli, or cufflinks (from â‚¬ 18.33), many of which are associated with ecumenical and equestrian orders: Saint Gregory, Saint Lazarus, the Knights of Malta. There are one or two pairs of accidentally fabulous buckle calfskin moccasins (from â‚¬ 150).

And socks. Socks are essential as they are the Gammarelli crossover superstar, having long burst into the sacristy and into the wardrobes of dandies and style lovers. Their most famous fans range from former French Prime Minister Edouard Balladur to Balenciagathe creative director of Demna Gvasalia, who sent them to her couture catwalk last summer. The knee-highs are made from lisle yarn, merino wool or pure silk (from â‚¬ 11), and the traditional color – red for the cardinals, black for the priests, purple for the bishops and white for His Holiness – was a few years ago increased by various fashionable shades: navy, yellow, turquoise and a burgundy. â€œAfter Balladur started wearing them, they became very popular among the French,â€ explains Massimiliano. â€œThen it slowly developed, until they got a bit famous all over the world. “

For such a fancy haberdashery, they have a pretty subtle game in the shop, with a single shelf allocated for their display. But the real surprise is a vignette of tiny Gammarelli anklets, in red and purple, for babies aged three months, six months and one year. A concession to the demands of commercialism or a nod to the transcendent power of adorable absurdity? Does it matter? They are – no other word – divine.

Over 1,000 riders come to the shrine for the start of the pilgrimage | Religion