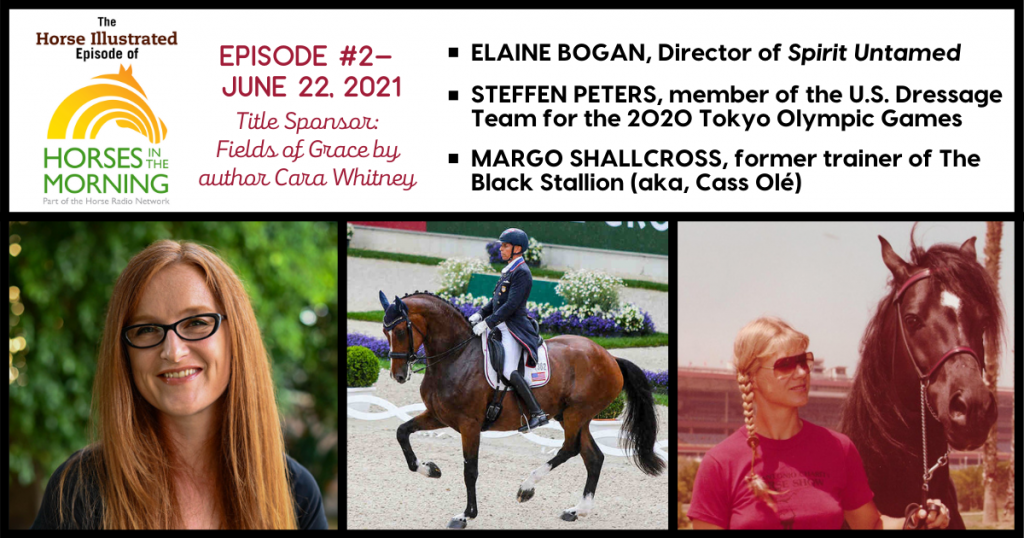 
In the second podcast episode of The illustrated episode of the horses of the morning horses, presented by the title sponsor Fields of grace by author Cara Whitney, hosts Glenn the Geek and Sarah Evers Conrad speak to Elaine Bogan, director of the new animated film DreamWorks, Untamed spirit; Steffen Peters, member of the US Olympic dressage team, who already has extensive international experience; and Margo Shallcross, the former trainer of Cass Olé, one of the horses who played The Black Stallion.

Link to the audio file for the visually impaired: COMING SOON

Elaine bogan is the director of DreamWorks Animation Untamed spirit, which hit theaters on June 4, 2021. After graduating with his BA in Classical Animation from Sheridan College, Bogan found his home in history, resulting in a challenging and successful career. She has been a writer with DreamWorks Animation since 2005 on a wide range of feature films and television series, and began directing for the studio in 2011. Elaine Bogan became DreamWorks Television’s first female director while working on the series. Dragons: Horsemen of Beurk. Her first episode was nominated for a 2014 Annie Award for Outstanding Achievement in Directing an Animated Television / Broadcast Production. She then directed episodes of the Emmy nominated series. Troll hunters and 3 below, both owned by Guillermo del Toro Tales of Arcadia trilogy. While the film is now in theaters, it will also be available on premium video on demand platforms starting June 25 for families to watch at home.

Steffen Peters came to the United States in 1984 from her native Germany to work for coach Laurie Falvo in San Diego. He became an American citizen in 1992. He has since been one of the nation’s top international dressage competitors, having represented the United States at four Olympic Games, four FEI World Equestrian Games and two Pan American Games, and now he is heading to its fifth Olympic Games in Tokyo, Japan, in July 2021.

Peters rode his KWPN gelding, Udon, to team bronze on his first Olympic outing in 1996. With Legolas 92, he won team and individual gold at the 2015 Pan American Games in Toronto and team bronze. at the 2016 Olympic Games in Rio de Janeiro. With his long-time mount Ravel, the KWPN gelding owned by Akiko Yamazaki, he won the FEI World Cup in 2009 and two individual bronze medals at the 2010 Alltech FEI World Equestrian Games in Lexington. He was recognized for his achievements with three USEF Equestrian of the Year titles, in 2008, 2009 and 2011.

Peters set a phenomenal record with his current best horse, Suppenkasper, a KWPN gelding owned by Yamazaki and Four Winds Farm. They were undefeated in 2020 thanks to the Adequan Global Dressage Festival in Wellington, Florida, and the CDI 3 * at Desert Dressage in Thermal, California. The duo started 2021 in the same winning fashion, winning the FEI Grand Prix and the Special Grand Prix. CDI 4 * at the Adequan Global Dressage Festival (AGDF) week 3 and the FEI Grand Prix and Grand Prix Freestyle CDI 5 * during week 7 of the festival.

Margo Shallcross was introduced to the Arabian horse world in 1964. Shallcross joined Anderlea Arabians in Albion, Iowa, as head trainer and farm manager in the 1970s. His responsibilities included training, breeding and presentation of the horses of Anderlea. In 1977, she became head trainer and farm manager at San Antonio Arabians, the home of Cass Olé. Cass Olé starred in two films, The black stallion and The return of the black stallion. She has shown the famous stallion in the wild at many national and international venues, including the American and Canadian Arabian National Shows, the White House, and the Washington International Horse Show. She has also featured Cass in television appearances. In 1983, she opened her own training center, Fancy Free Arabians, which she ran until 2006. There, Shallcross offered training, lessons, breeding and showed her clients’ horses. at local, regional and national levels.

Shallcross, who has been judging Arabs since 1990, is a Senior National Judge with the Arab Division of USEF, the Pinto Association, the American Miniature Horse Association, and the American Miniature Horse Registry. She has judged numerous national and international world competitions, including exhibitions in Venezuela, Mexico, Australia, New Zealand, Austria, Belgium, Denmark and Canada.

We would like to thank our title sponsor, Fields of grace by author Cara Whitney. Get closer to God on the farm. From her horse farm in Nebraska, Cara Whitney, wife of Dan Whitney (aka “Larry the Cable Guy”), shares humorous and touching stories featuring her naughty horses, cows and dogs. In Fields of grace, Cara shows us that it is always a good time to share the love of Jesus with your neighbor. Search Fields of grace books are sold everywhere.

We would also like to thank our main sponsor, Straight Arrow Products. Mane ‘n Tail’s latest premium product line, Ultimate Gloss, will leave your horse’s mane, tail and coat with award-winning shine. If you are looking for a formula that gets down to the skin, releasing dirt, dander and buildup from your horse’s coat, then Ultimate Gloss is your perfect bath solution. Made with natural ingredients, Ultimate Gloss offers a gentle way to leave your horse with a glossy, long-lasting shine. Find out the secret behind the “Boss of Gloss” by visiting the website at www.ultimategloss.com.

The story of one of the most unique summer Olympics ever