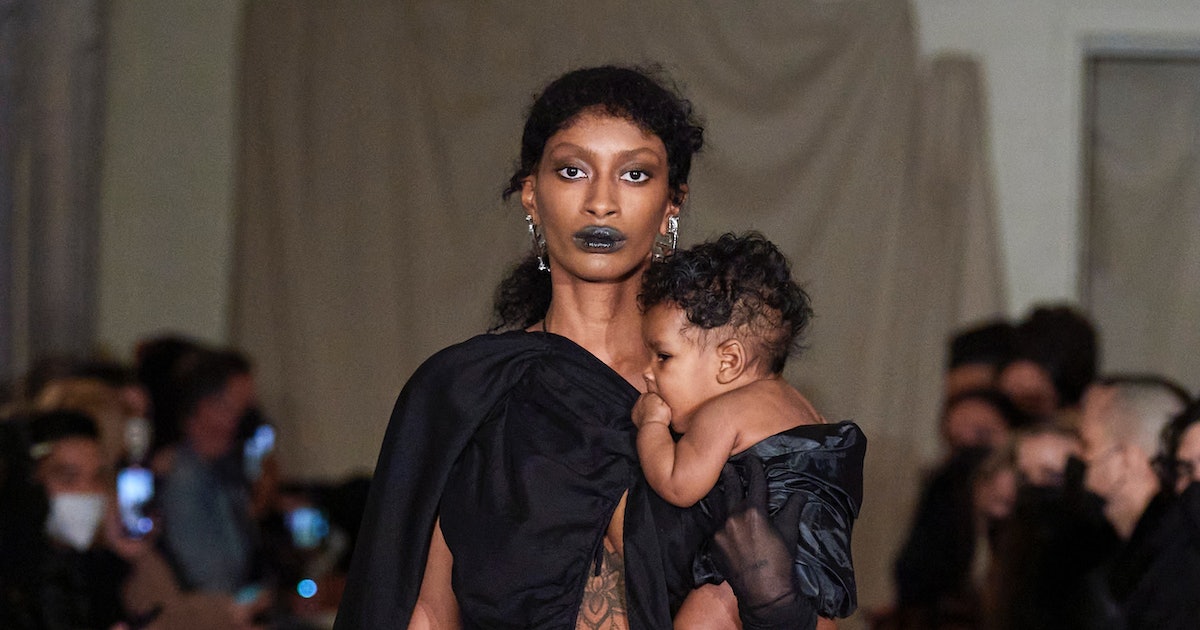 One day before Elena Velez’s New York Fashion Week show – a show that involved some seriously killer clothes, but more importantly, looked like the start of something exciting in a young artist’s career – was a picture of contained chaos. At her studio in Greenpoint, Brooklyn, Velez and her team put the finishing touches on her fall 2022 collection, titled “Year One—Maidenhood & Its Labors,” which premiered at the Freehand Hotel in Manhattan on Feb. 11. But it wouldn’t be Fashion Week if it weren’t for some sort of drama – so when Velez discusses the aforementioned “finishing touches”, she really means ditching clothing concepts and starting from scratch, rolling with the changes that come with fittings and “last minute disasters.

“We know it’s coming! We’re about six months ahead,” Velez laughs at Zoom as she wanders around the sprawling industrial space she shares with her partner. “I don’t know why it always comes back to the last 24 hours.”

This kind of experience is normal, even for the most seasoned designers. But Velez, 27, is only showing his second official collection. Despite this, his designs are fully evolved, thoughtful, and filled with the stories of his life.

“You have to start from a place of identity, and I have nothing else to say,” she said. Velez, an only child, grew up in Milwaukee and spent his early years in shipyards, engine rooms and docks with his mother, who worked as a captain on the Great Lakes. As she explored these industrial spaces, her interest in working with fabric and form grew; though she didn’t know what to do with that interest until she realized fashion was a viable career. She studied at Parsons for undergraduate and Central Saint Martins in London for postgraduate. At the first, she learned to develop her artistic abilities into a brand that would appeal to investors and consumers. At the latter, she was encouraged to take wild risks, to embrace making something hideous, something beyond the bounds of taste, and then embellishing it after the fact. Both experiences, she found, revealed a tension between “very Midwestern blue-collar, traditional craftsmanship through a fine art perspective.”

“There were so many different unique opportunities to bring Milwaukee back into my story and reference it as a point of authenticity in the work,” Velez adds. “Accepting and rejecting my unglamorous Midwestern upbringing is an angle that resonates with people.”

This theme is a constant, rooted in the philosophy behind each of Velez’s collections. But for “Year One,” it translates to a character study of “our wife,” she says. “There is a very paradoxical narrative of the brand that stems from my relationship with my mother and my idea of ​​femininity and beauty – what I wanted from her as a child – pretty, light and delicate – compared to what I want from it now: a more casual and industrious femininity that is aggressive and enduring and prioritizes function over aesthetics She shows a few pieces of clothing (which are all in various stages of development). ‘completion) to demonstrate: A tailored dress-length jacket features a lapel that runs all the way around the body. those cool indentations and pleats that are elegant, but also a little butch.” A dress made from a World War II parachute with a corset-like construction is on trend while still fulfilling its original purpose. third look she shares is the bones of a dress, pinned to a form; the garment is made of an oilcloth laminate that was once also a parachute. “We’re going to turn this into a beautiful dress,” she says. “It will be brutal and severe, but also charming.”

When I see this dress in its finished state at Elena Velez’s presentation, it is exactly as described – an off-white strapless dress with a high slit and gathered pleats at the bodice. Any trace of chaos or unpreparedness from the day before has disappeared. Inside the Baroque Georgia Room at the Freehand, Velez and her team have created their own world, one that marries industry and a certain maritime roughness with all sorts of feminine archetypes. The “Belle Epoque prostitute,” as Velez described her to me the day before, manifests herself in a transparent dress with an elastic cutout around the model’s belly; the “certified forklift girl, who looks like midwestern tractor glamour,” wears a pair of JNCO-sized black pants with silver hardware, and a “spiritualist farmer” opens the show wearing an off-white crepe dress with cutouts, holding a piece of burning incense in a hanging censer. The models are adorned with pieces of fabric around their chin that wrap around the back of their head. Their hands are covered in charcoal up to their elbows, and their lipstick is dark and smudged all over their faces, like dirty angels. Their blank expressions convey the distinct feeling of demonic possession. It’s a scene from the fanciest horror movie you’ve ever seen.

There’s another element of Velez’s upbringing that plays into every garment she creates: the designer is half-Puerto Rican, a country she grew up visiting “here and there.” “My relationship with Puerto Rico was very strange,” she says. “I was raised by my mother and my father is Puerto Rican. I have kind of a weak relationship with her, unfortunately. But as anyone of mixed ancestry will tell you, growing up half and half doesn’t always translate to a literal interpretation of two cultures. It’s a fusion of ever-changing identities, a constant struggle to understand each other while channeling all cultural paradoxes into a single human experience. As Velez bows out at the end of the parade, she waves and gives kisses, then walks straight into the photographers’ pit at the end of the runway to give her dad a hug.

The love story grows with age