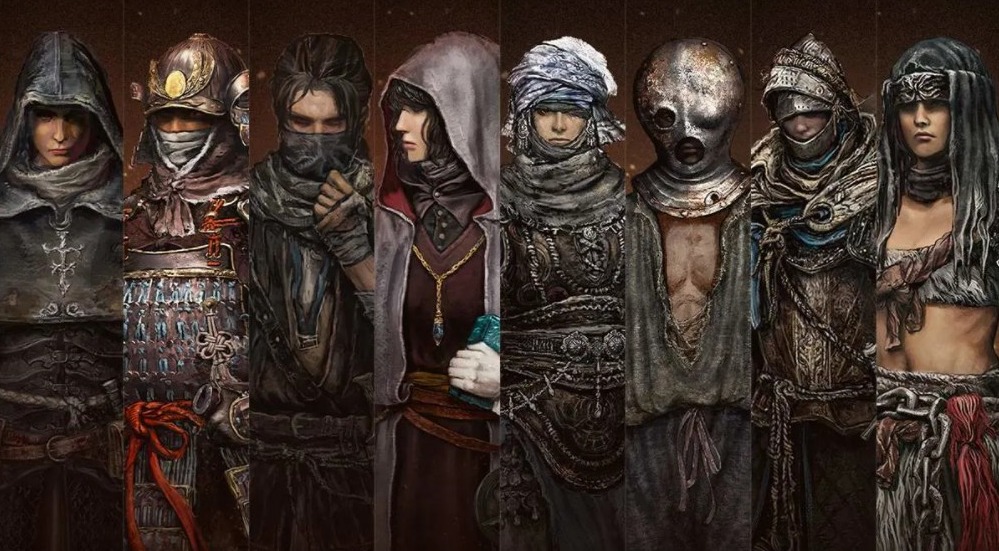 Explanation of the classes of Elden Ring: which to choose?

It’s been a few days since its release and Elden Ring is already smashing the records set by previous FromSoftware titles. The cool action-adventure RPG asks you to choose a class at the start and new players are often confused. So we will explain the Elden Ring classes here.

The class you choose in Elden Ring plays a crucial role in your progression, especially in the early stages. You should opt for a class that you find suitable for your skills and playstyle.

Each class comes with a different set of states, starting gear, and other items. This is why players think for long periods about which class to choose, and why.

What are the classes in Elden Ring?

Elden Ring features classes which are the starting archetypes available to the player. The class you choose will determine your starting stats and gear. You can also improve and upgrade them later. The game follows the same concept for classes that was available in the Dark Souls series.

Thus, you need to know the classes in order to choose the right one as it will strongly influence your character growth. There are a total of 10 classes in Elden Ring that you can choose from. 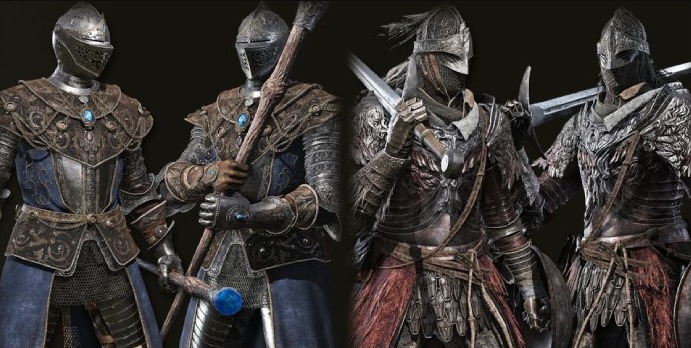 Each class in Elden Ring has a different set of stats, starting gear, and gear. You must first seek to understand what these statistics mean to better know the prices.

What are the Elden Ring character stats for classes?

It is important to understand each stat and its impact on your character in Elden Ring. Here are the eight states that determine a character’s health, damage resistance, weapons, armor, and other crucial factors:

Ah yes. Start of Elden Ring. That means I’ll be playing around with character customization and different starting classes for hours without progressing in the actual game…

All Elden Ring classes with their levels and stats

Elden Ring has 10 classes, and each class excels at a different skill. You need to pick the right one to get the best efficiency based on your playstyle. Here’s a quick breakdown of all the classes with their levels and stats:

Now let’s take a quick look at all the Elden Ring classes and what they will offer your character.

The hero is the perfect choice for the early game because it offers the highest starting strength. He is also capable of carrying massive weapons and dealing heavy damage with ease. It starts with a battle axe, leather shield, and light armor, which makes it quite tanky. 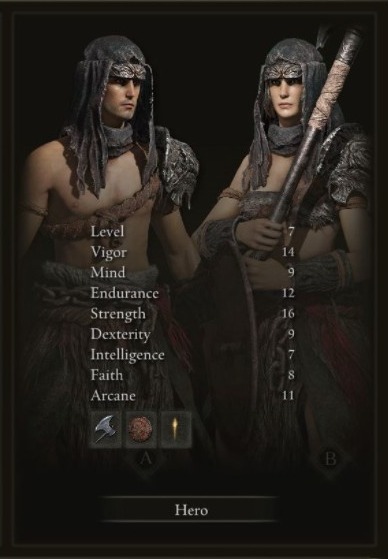 This class also has good stamina and stamina. So choosing it would mean that you will start the journey with full strength and all areas covered.

The Bandit comes with the highest starting arcana. It is suitable for players who prefer to parry attacks or backstab enemies. It starts with a knife, a shield and a short bow. This way, you won’t deal massive damage with regular attacks. 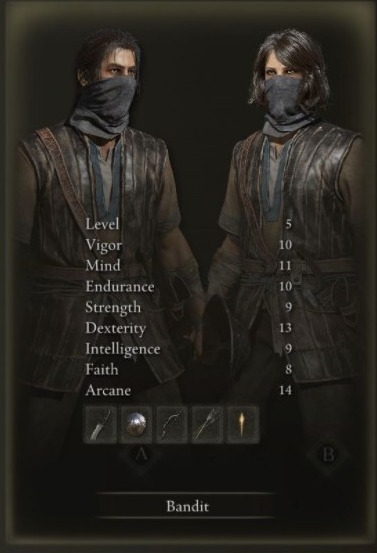 However, the set makes Bandit good up close and from a distance as well. The shield makes it easier to parry attacks while the short bow allows you to quickly inflict damage from a distance.

Astrologer offers the highest starting intelligence and spirit as it is the traditional mage class. It starts with an Astrologer’s Staff, a Short Sword and a Small Shield, a Glimmerstone Pebble, a Glimmerstone Bow, and a Light Heater. 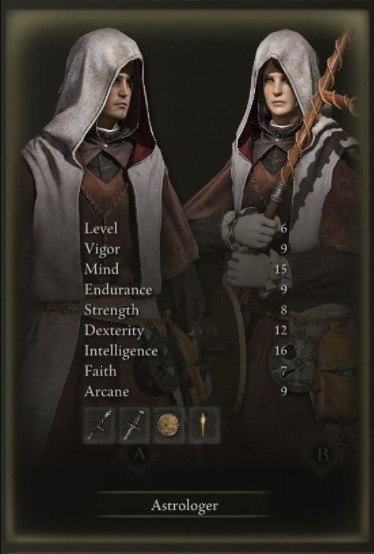 It is only suitable for skillful players as it only has a few melee options as backups as well. Astrologer can easily cast multiple spells but lacks health and stamina compared to other options.

The Warrior is for players who want to deal big damage with smaller weapons as he has the highest dexterity and good weapon skills. This nimble melee class comes with two scimitars, a small leather shield, and medium armor. 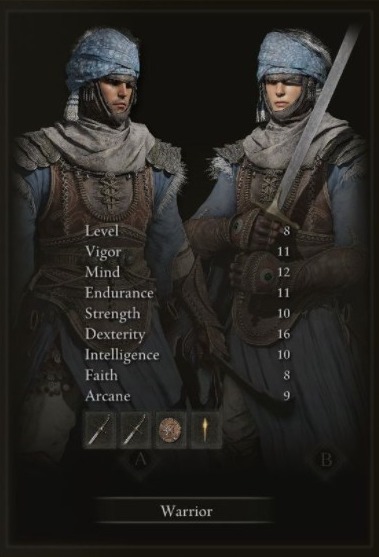 However, the Warrior cannot use heavier weapons like the Hero class. It is also not suitable for magic-based builds and does not have a ranged weapon.

The Prisoner is a unique class that offers high starting dexterity and intelligence. He uses a combination of melee and mage classes. This class starts with a Thrust, Shine Staff, Rift Shield, Magic Shine Blade, and light armor. You can do quick spell casting and melee attacks. 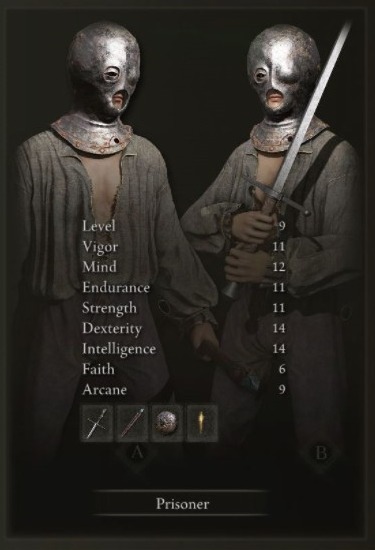 However, this class deals less damage than other classes. He also has less health and armor.

Confessor is good for beginners interested in the mage class. This is another class that mixes two styles, has high starting faith, and overall balanced stats. You will need to improve several stats with this class. 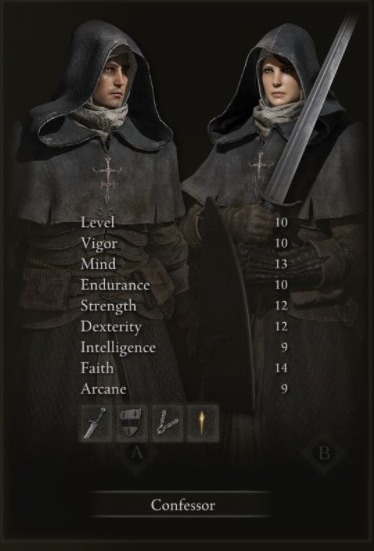 It starts with a Finger Seal, Broadsword, Blue Crest Healer Shield, Urgent Heal, Assassin’s Approach, and Light Armor. You should also remember that the Confessor lacks health and stamina.

Wretch is only suitable for experienced players who need an extra challenge. Streamers often choose this class while playing nuzlockes. If you are a beginner, we do not recommend choosing it because it makes the game more difficult in the beginning. 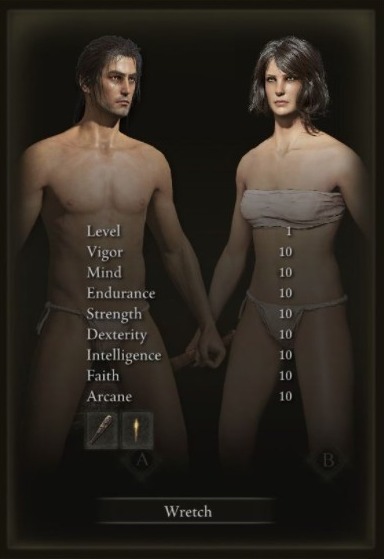 This class begins without armor and with a club. Thus, you will be vulnerable to almost anything. However, you will get full building freedoms as all stats start at 10.

The Vagabond is the perfect class to start the game as it offers the highest stamina and HP. It comes with a longsword, halberd and heating shield. That means he’s good at dealing high impact damage and shielding himself from all sorts of attacks. 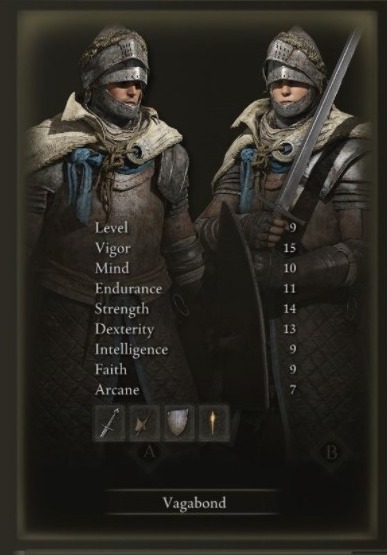 If you have no idea how classes work in Elden Ring, you should blindly choose that class and start playing. However, this class does not excel in magic, nor does it have a ranged weapon in the beginning.

The Prophet is one of the few mage class options available in the game. It comes with the highest starting faith and has more balanced stats than the Astrologer. It focuses more on casting spells but less on dealing damage. 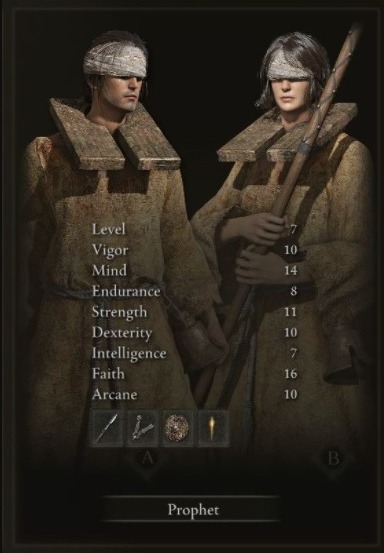 This class starts with Finger Seal, a spear, Heal, Catch Flame, and light armor. It is also low on health and stamina comparatively. However, you can make up for them by finding more spells while exploring the lands.

Samurai is a unique and powerful class that offers the highest starting stamina, very good strength, and the second highest dexterity. It starts with an Uchigatana, longbow, round red-thorn shield, and medium armor. 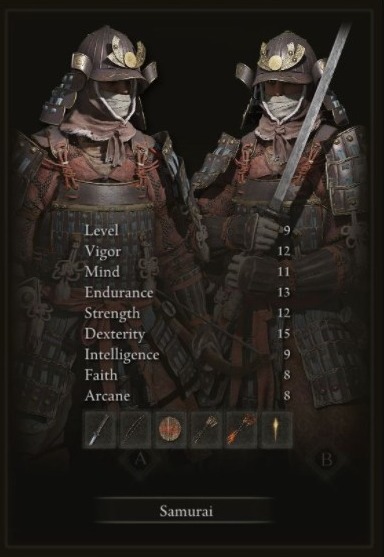 It is good for close encounters as well as long range weapons. However, parrying attacks is a bit complex using this class. You also cannot excel in magic in the early game if you have chosen the Samurai.

Each class in Elden Ring has different starting gear and armor. Take a look here:

What is the best class in Elden Ring?

By now you would have already realized that there is no better class in Elden Ring. Each class has its unique strength and flaws. They have different weapons, abilities, and uses. It’s up to you what style of play you have.

Oh my God. Restarting Elden Ring with a different class took my experience of the game from miserable to great. wow. Difference day and night! I’m so glad I changed classes instead of quitting!

If you need a versatile player to ease the game in the beginning, you can go for Vagabond. However, if you want to make the game harder, you can choose Wretch. The ultimate decision will be yours.

Now you know all about Elden Ring courses. Now you can compare and choose the right one for your trip. Let us know which one did you choose and why, using the comment box.