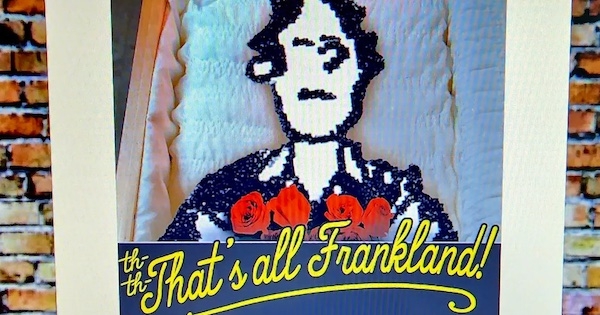 When I heard last week that Frank Magazine had announced its own demise – “regrets to announce the death of Frank Magazine Atlantic…September 14, 2022” – then disappeared from social media while its last editor disappeared curious journalists, I confess that I felt… nothing.

I had once been a fan.

When Frank first appeared on local newsstands 35 years ago, it was an unprecedented publication here. And not just in Nova Scotia. The closest equivalent was the British political satirical magazine Private Eye, on which it was loosely based.

It probably shouldn’t have been surprising.

David Bentley is the ex-pat British journalist behind the original Frank.

He was also – it must be admitted – the chief designer of the current allnovascotia.com and its ever-growing collection of business news websites allsomewhere.com, the late Halifax Daily News and its prequel Bedford-Sackville Weekly News, not forgetting some of his most forgettable adventures like Who’s News, “a local Toronto people thing” that failed to find traction among Torontonians and Fleur, a traffic-controlled fashion tabloid that lasted only a few issues in the early 1970s.

Bentley, in short, is that rare thing – a journalist who was also an entrepreneur and committed to being good at both.

Franc, to be frank, was a fortuitous accident.

A little history. Bentley had been one of many British journalists drawn to Nova Scotia in the 1960s to work for Graham Dennis’ Halifax Chronicle Herald.. Denis was in love with all things British.

In 1977 Bentley, his wife and another couple decided to start their own small newspaper, The Bedford Sackville Weekly News. He began posting daily two years later. Knowing that Dennis could crush their fledgling daily simply by launching an advertising price war that the small newspaper could not win, Bentley approached Dennis directly to assure him that their new paper had no ambitions beyond Bedford-Sackville. Dennis obligingly left them alone.

Whatever Bentley’s original intentions – “we finally realized we just couldn’t do it by staying with Sackville”, Bentley insisted in the mid-1990s – The Halifax Daily News moved to Barrington Street in 1981 and began competing directly for Herald readers.

When I reminded him of these assurances in a 1994 interview, Bentley became sheepish. “How can I explain it?” he asked, then changed the subject.

But the fact is, out of all his journalistic and entrepreneurial ambitions, Bentley had created the Daily News – then one of the few modern day newspaper startups created by journalists in North America – and made it a success, albeit a modest one and soon in need of a capital injection, Bentley didn’t have to go to the next level.

It was one of the reasons Bentley sold its newspaper to Newfoundland industrialist Harry Steele in 1984.

What to do next? Bentley was only 41 and still fascinated by the publishing business. But his options were limited by a non-compete clause in the Daily News sale agreement.. He couldn’t launch a competing publication and he couldn’t solicit publicity.

Frank became his answer. No advertising. No competition. At least not in the conventional sense.

It’s worth remembering that Bentley’s track record as a field reporter before Frank was superb. He had been the heralds correspondent on the spot during a bitter but iconic 13-month strike by Canso fishermen in the early 1970s, giving him what he would later call “a catbird seat to see Nova Scotia’s patronage politics shut down “.

He then convinced two other high-profile journalists – Lyndon Watkins, another British expat who had been the Globe and Mail’s Atlantic correspondent, and Dulcie Conrad, a seasoned political reporter – to become his associates in Frank, a bimonthly gossip sheet that billed itself as “Frank by name, Frank by nature”.

Thanks to all the political, business and societal insider sources the three “Franks” had collectively accumulated over their years of reporting – and the fact that they were not dependent on advertisers – they were able to publish the most arsonists, the consequences be cursed. (Mostly. More on that later.)

No one bought Frank for his sloppy layout and frequent typos. They bought it – or, more likely, read it, often sneaking through the supermarket queue – to get the news they couldn’t find anywhere else and for the kind of stories that “take away the rage of the powerful”. Frank has become essential reading for those interested in what the powerful are really doing, and anxious reading for those in power who worry about when they might find themselves “enfranchised.”

Frank was a much-needed antidote to the bland journalism that passed for real reporting in Nova Scotia at the time. According to one estimate at the time – I assume it has not been verified – nearly 100,000 people bought, borrowed and requested a copy of each bi-weekly issue to find out the filth of what its editor of Ottawa called the “Equestrian Courts” of Canada.

Readers got more than the price of admission. Stories about the drinking habits of Brian Mulroney, the marital woes of Peter Mansbridge, Pierre Trudeau’s “love child”, details of the forbidden proceedings of the trials of Canadian serial killer couple Paul Bernardo and Karla Homolka.

Closer to home, Frank was the first to publish major scoops on the sexual assaults of former Nova Scotia Liberal Premier Gerald Regan and Conservative Premier John Buchanan’s secret trust funds. Not to mention regular real estate envy features like “Whose House” which focused on where and how the wealthy lived.

If you’re looking for a marker for the start of this Frank’s disappearance, however, you could do worse than start with a Nova Scotia court decision from February 2000 which awarded former senior Nova Scotia civil servant Gordon Earle $60,000 after he was libeled in a story of Frank written by Bentley himself.

The story claimed that Earle, then deputy minister, was about to be fired for being a “disappointment” in his job. Earle, in fact, had decided to take early retirement and could have remained deputy minister if he had chosen.

It was sloppy reporting – Bentley did not contact Earle before executing him – but the judgment also seemed like the establishment’s revenge for Frank’s nearly 15 years of scoops and scandals.

Although Bentley claimed at the time that Frank would continue – “Frank may have been shot but he was not murdered” – Bentley and Watkins transferred ownership to one of their reporters for a dollar later the same year. (Conrad had previously sold his shares to Bentley and Watkins.)

This was the start of a slow spiral that intensified with each new owner over the next two decades.

The nadir came around 2010 when the newspaper was sold to a Cape Breton (“surely not”, as Frank might have put it) drugstore wholesaler from Cape Breton named Parker Rudderham, to whom it seemed a bit more than a strange vanity project. Soon after, four of the magazine’s five editors were fired or resigned in protest at the firing of a journalist who had quizzed a magazine column on sexism.

You can read about his legitimate decline and downfall in my colleague Tim Bousquet’s article, “The Vile Racism and Mysogyny that Was Frank Magazine.”

In the end, Frank had given up on distressing the comfortable. He instead became that rude old uncle at family gatherings, the one who always said stupid, mean, inappropriate, racist, misogynistic things to anyone and everyone for no good reason.

I used to buy and read every issue but as time passed and Frank became less and less interesting and more and more offensive I just stopped looking at him on the supermarket shelf or to follow it online.

In the end, I didn’t care that he was gone. And that’s a sad obituary for any publication.

We have many other subscription options available, or send us a donation. Thanks!

An Unexpected Adventure: 5 Reasons To Watch “Side Story Of Fox Volant”

King thanks nation for support