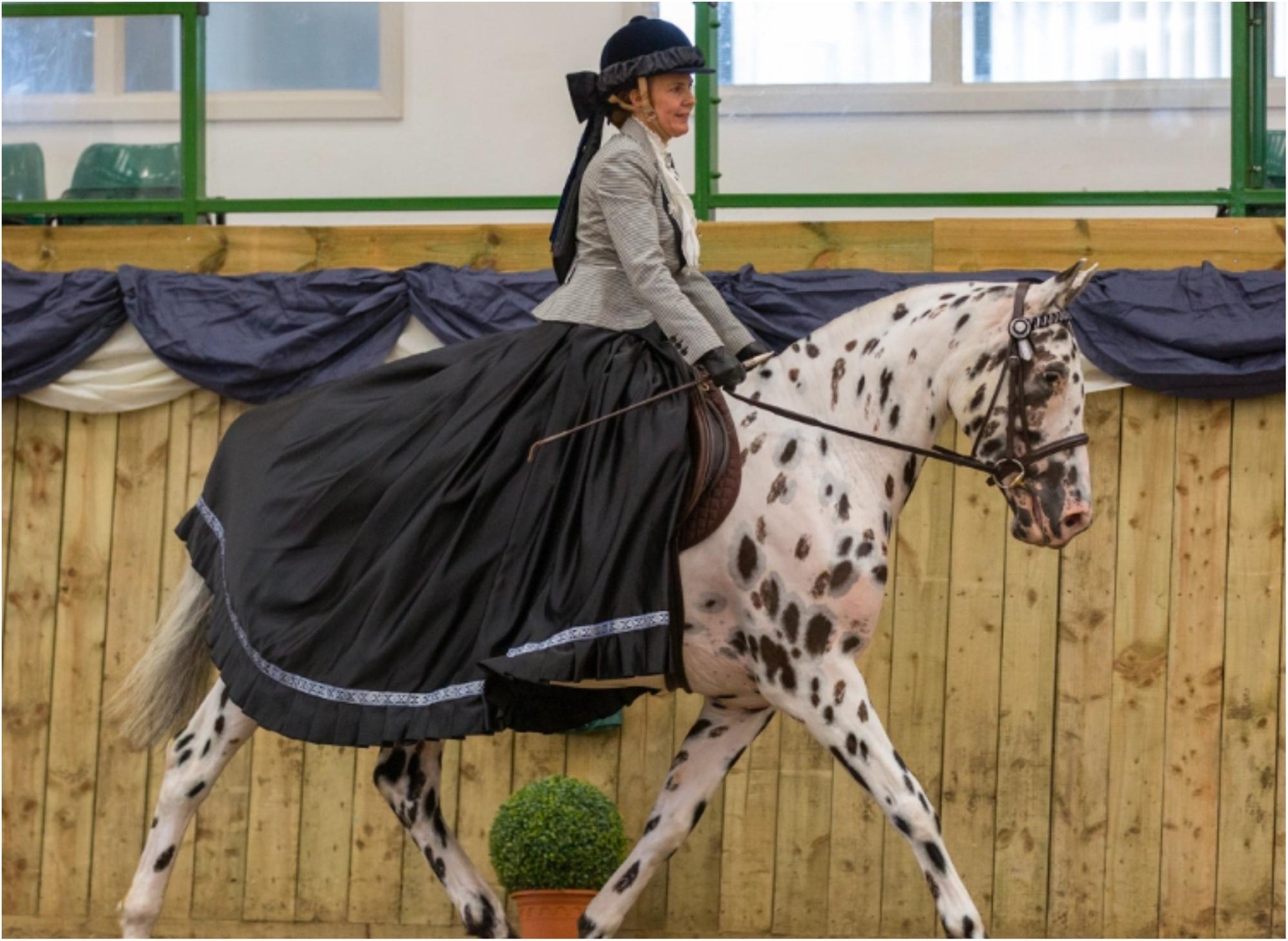 Sully has been featured in hand at British Appaloosa Society (BApS) breed shows since he was a yearling, where he has continued to entertain the crowds by jumping every year.

This year promised to be even more festive after the cancellation of the 2020 show due to COVID-19 and the company reaching its 45th anniversary.

We usually attend the Northern Breed Show, which has been held for some time at the beautiful site of Bishop Burton College. It is a beautiful place and it is very special to be a part of the show.

Register now to our daily newsletter

The newsletter i cut through the noise

This year the BApS council organized another well organized breed show. In fact, it was so good that we found ourselves in a real dilemma – are we taking Sully for the first time to Nationals in the south?

In the end, we figured we would make the three and a half hour trip with him. We estimated he was five, more mature (allegedly), and a good traveler. We felt he would put up with the journey.

Well he did. Me on the other hand? In other words, I think my horse handled the trip better than I did. After adding an extra hour to our itinerary by driving home for my boots (and almost causing a divorce in the car), we set off. Again.

I wasn’t a fan of the slowdown in motorway traffic and there were quite a few delays which meant we were at a standstill for some, but Sully took it all in his stride. I had traveled with all my hay nets hanging up and he chewed happily thinking that all of his Christmases had arrived at the same time.

Once there, the excitement and nerves set in, but Sully was not phased by his new surroundings. He was located next to Mitzi (his unrequited love from previous shows), so he was more than happy.

We had a good evening meal with the company; giving us the chance to find friends I only knew through social networks and, of course, the opportunity to catch up with the old ones too (big thumbs up to the Geordie gang). My husband even did karaoke – much to our twelve year old daughter’s embarrassment.

Earlier in the year, Sully and I enjoyed the Northern British Appaloosa Society exhibit when we came home with a stack of rosettes. It was his first year here as a mounted horse so I was super proud.

Going to the nationals is much more important as there must have been around seventy horses easily (if not more) competing that day. In one of his classes in hand, there were fourteen I believe, so I was super proud of the fourth place.

Such strong classes bring out incredible beauties. Everyone looked fabulous and their horses too. I was just happy if I stayed. That was my main goal for the day. You never know how a youngster will go to the big rings with huge classes.

Sully was in great shape and outside as usual, waiting for class. So much so that I wondered if I should ride it, but with friends by my side there was no time to argue. They literally put me in the saddle for the Concours d’Elegance. I was on his back before I had time to blink. Best for the nerves, I think.

I love the competition class. I have always admired the competitors since he was a yearling. I remember the ladies who came in, magnificent in their mounts and their flowing skirts at the trot. It is fascinating to see and so elegant. I never thought I would go do it on Sully because it’s the stuff of dreams, literally the stuff of dreams, but I did.

In the North, we finished second and at the Nationals, we got a third place. Absolutely fantastic. I think I cried a little when they passed me the rosettes in the salons. I had had a number of falls from Sully earlier in the year where I shattered my self-confidence due to an injury he sustained from a fall into a ditch.

He had had treatment, but the fear of falls stayed fresh in my mind. So staying, riding this beautiful arena with all these wonderful horses was even more special for me.

I have met some fabulous people from these classes. Real inspiring women. They were all so lovely and one in particular helped keep me calm. I have to say a personal thank you to the wonderful Rachel Leyland who checked me out the whole time I was in the ring. She did the same at the Nationals too. I don’t think she has any idea how much this has helped me anchor.

As I prepared for this class, I asked my daughter, Alyssia, to help my young horse “take” the skirt. It’s not for all horses, but Sully really is a special little guy.

He had only been riding for a few months when we started training him in confinement. A friend in particular encouraged me to train daily and motivated me to ride in it, despite his young age and his introduction to horseback riding. You know who you are and I thank you from the bottom of my heart.

In parallel, I also joined a great Facebook page for the competitions (thank you Laura Watts for your help) where Sarah Wood, the coordinator, challenged me to go up to the race class and promised me a surprise if I was doing it.

Well I did, and I told her after and sent her a picture. Sarah makes rosettes for a living and sent me the most beautiful ribbon for courage and a letter that I will keep forever. I’ve never met her, but wow… a woman encouraging women is something to be proud of. Thanks Sarah; it’s in my kitchen.

There are so many nice people out there who help others by inspiring them and giving them the courage they need to believe in themselves. Believe me, I know. I have also experienced so much encouragement from my friends and family. You are all helping. At the show itself, I was hesitant to roll and my lovely show buddy geordie gave me just the chat I needed. Thanks Heather. I’ll be there for you too when you get on Baby Rlmo next year.

My horse trainer, Harriette, always pushes me and believes in Sully even though sometimes I swear her when she says “now do this but better”. This is the lady I sent him to so he could go. It is excellent and I highly recommend it. I have such a great support network that only wants the best for Sully and me. I am very, very lucky.

My poor breeder is constantly updated with our antics. Sorry Paula, I can’t help myself. I just need to share every moment with you. I’m kind of like your personal stalker. I try not to shoot every minute with Sully but it’s a hard habit to break.

At the nationals, Sully was third in Ultra Novice Ridden out of a solid class of about twelve, I think. Again, it was mind blowing. To think that at the beginning of the year I felt like I was not good enough for him. We were now riding here at the Nationals – with a smile on our faces.

Sully went to the Novice Ridden class with my friend Ellen Webster. Ellen helped me bring him home (before he was sent to Harriette’s) and has a very special relationship with him. They put on a fabulous show and got there first. Incredibly, they made it to the evening performance championships. It was fantastic. My heart was bursting with pride. Ellen, seriously, a big thank you to you. You’ve been there for all of my “firsts” with Sully and his wonderful memories that we create together.

While they weren’t seated, they put on a brilliant show; despite it being so broken. Thank you Ellie Twiggs who kindly loaned Ellen all her evening outfits for the ring as we hadn’t thought he would qualify so we didn’t bring anything. What an incredibly nice woman she was but, as I quickly learn, the equestrian world of Appaloosa is full of these great people.

It seems like if you have an Appaloosa, you instantly have friends. It’s the friendliest show in the world and I highly recommend the company as the top company for Appaloosa owners. The council works very hard at these events (and the judges) and by God they create memories for all of us. We are very grateful.

Last but not least is a thank you to my friend who I met across society when Sully was just a foal Kirsty Blythe and her adorable husband Danny. They let my daughter do her first Appaloosa Junior Handler lesson with their beautiful, calm and beautiful mare ‘Mitzi’.

Alyssia loved her junior class and came home with a beautiful rosette. Also, thanks for helping me get undressed for my next class (super quick change of outfits) and for diving Sully in the morning. I don’t know where I would be without you snatching all the skirts, canes and gloves from me.

I know my husband is not on horseback, but he kind of took care of the fact that my daughter and I have horses at home. He had to move to a larger equestrian property for our horses and is constantly harassed for a 24 hour arena (when did we have him?). All I can say is come join us… a fourth fuck horse isn’t much for the gang. Get in the saddle. If you can’t beat us, join us.

If you want to follow our equestrian getaways, follow me on Facebook on In The Saddle – Anita Marsh. Or you can add me on Twitter, but keep in mind that I’m a total technophobe and don’t know how to use it on @inthesaddleblog.

Don’t expect to read up on a professional rider. I’m just a middle-aged postmenopausal woman living her dreams in the saddle with her three horses at home. Usually ending up in precarious positions, always doubting herself but never losing confidence in her equines.

Until next time, stay safe and have fun driving.