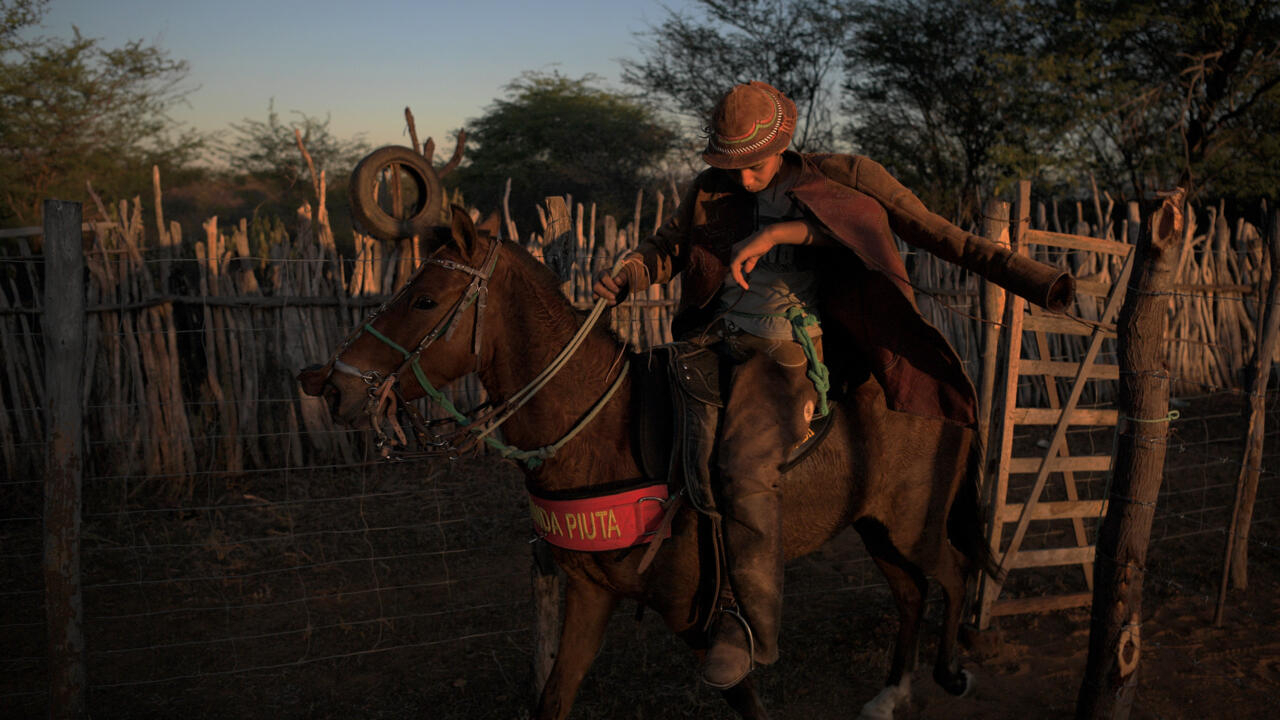 The harsh, semi-arid region of Sertao in northeastern Brazil is the birthplace of this unique rodeo tradition, in which cowherds on horseback pursue a charging bull through thick cactus-strewn scrubland, rushing to grab a leather tag around his neck.

One at a time, hundreds of bulls are released from a tight paddock, charging into the bush as two-person teams set off in pursuit. The winner is the team that gets their tag back to the starting line the fastest – sometimes by sprinting on foot, for those who fall off their horse.

Bleeding from his left eyelid, cowboy Jose Vasconcelos appears to have had a near-death experience as he peels off the heavy head-to-toe leather garments riders wear for protection.

But even though he failed to catch his bull, he is beaming.

“It’s the best! Wow, the adrenaline. I can’t even explain it,” says the thickly built 29-year-old, who has previously smashed his arm, leg and collarbone in competition .

Besides the screams of cowboys, the clanking of spurs and the smell of barbeque, there’s a strong hint of politics in the air at Fazenda Piuta, a cattle ranch outside of Cabrobo, State. from Pernambuco, a five-hour drive from Lula’s hometown.

The electoral showdown between the ex-president (2003-2010) and Bolsonaro is in full swing, and – as seems to be the case for virtually everyone at the rodeo – Vasconcelos is not a fan of the incumbent.

“I don’t know much about politics, but I know this: Bolsonaro is not a good president,” he says.

Economical with his words, he cites a common complaint: inflation.

“In Lula’s time, gasoline was cheaper. Everything was.

Brazil’s agribusiness giant is broadly backing Bolsonaro – the third “B” in its “Bibles, bullets and beef” coalition.

But cattle ranchers in the northeast are outliers.

The region, Brazil’s poorest, is also a key electoral battleground, home to a quarter of the country’s 214 million people.

Lula, who won the first round of elections on October 2 with a tighter-than-expected 48% to Bolsonaro’s 43%, won the northeast with a crushing 67%.

Bolsonaro, who took just 27% in the region, hopes to do better in the second round on October 30, but he faces a tough fight.

Ana Gabriele dos Santos, a 25-year-old farm worker who helps groom horses, was just a child when Lula won the last election 16 years ago. But she says she grew up hearing how her social programs helped people.

“Since I was a kid, I’ve heard people talk about Lula. We were for Lula then, we’re for Lula now,” she says.

“He is from here, he knows what it is. He thinks about the poor. Bolsonaro no. He just thinks about winning.”

“Bolsonaro is worth nothing. He came up with this ‘Auxilio Brasil’, but it’s just a new name for ‘Bolsa Familia’ (Lula’s signature welfare program). And everything he’s done , is to inaugurate the irrigation system. The one who started it was Lula,” he added. said Nogueira.

The rodeo begins with a Catholic mass on horseback, where a priest blesses the riders and prays for their safety.

This is not an easy task. Two weeks before this event, a cowboy was impaled by a branch in the parched scrubland and died.

The danger doesn’t lessen the appeal for die-hard fans, who ride trucks or scale thorny trees to cheer on the runners.

“We live for this. It’s bigger than football here,” says Maria de Moraes, 48, a farmer and self-proclaimed rodeo addict.

Another thing also excites him.

“Lula, Lula and Lula,” she says when asked which candidate she is voting for.

“I get goosebumps just talking about him.”