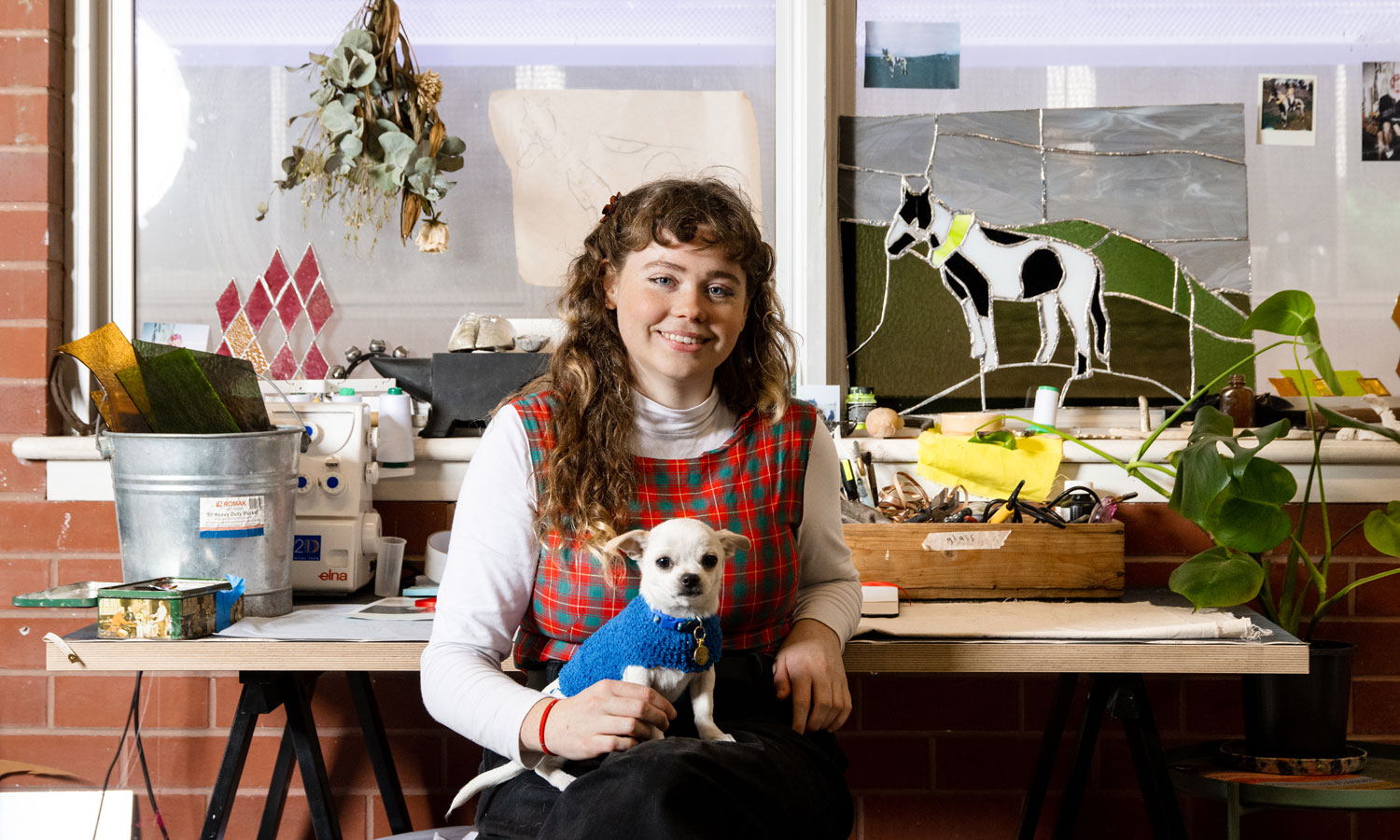 “I first went through my ruff phase and then moved on to corsets,” says Chelsea Farquhar, sifting through an assortment of brightly colored fabrics, ribbons, cords and beads in her West End studio .

“They’re actually really easy to make because they’re segmented – it’s just a lot of sewing. It’s fun to play around with different ways to make them, using different types of boning like wood and rope.

In 2020, Farquhar moved to Melbourne, where she ended up spending much of the year in lockdown while completing honors at Victorian College of the Arts. At the time his work was sculpture-driven and often quite serious, but soon these colorful and anachronistic experiments began to creep into his practice.

Now back in Adelaide, Farquhar’s patch of ACE Gallery upstairs studio space has become a place to play and collaborate. The wall above her desk is covered with Polaroids of her friends, many of whom are artists and performers themselves, modeling an array of corsets, masks and gloves in bright pink and yellow tones, against a backdrop of baroque curtain installed in the studio.

“They’re really beautiful and they’re really fun to make,” she says of the pieces. “I use really cheap fabric, which is terrible; the pink in there is $2 satin – it’s called “party satin”, and it’s repugnant.

“I wanted to have a period confusion; I wanted to displace the viewer using contemporary, inexpensive fabrics that would never have existed a hundred years ago. I really like this relationship to this old style of crafting – it added to the weird, dreamlike element of it. Rather than bringing you back to one place, corsets, ruffs all come from different places and times. I like to mix them and build this disconcerting and playful world.

Beads and lead are among the colorful materials that Chelsea Farquhar uses in her artistic practice. Photo: Jack Fenby

Since moving in earlier this year, Farquhar has primarily worked on a suite of video tableaux titled Fluttertongue, created as part of Guildhouse’s Collections project and screened at the Adelaide Festival Center during SALA. While the Collections Project series typically invited artists to delve into the physical archives of local cultural institutions, Farquhar’s work drew inspiration from the Adelaide Symphony Orchestra as a ‘living collection’.

“They have a ‘living archive’ which includes all the players,” she explains. “So I spent time interviewing musicians, watching rehearsals, researching their catalogs and looking at sheet music – that’s where I got the title of the show. It’s a phrase musical, an instruction, and I liked the idea of ​​this really strange word that sounds a bit cheeky.

Farquhar says she’s not a musician (“I called the conductor a composer – the bassist laughed in my face”), but appreciated the spirit of collaboration, playfulness and story that runs through the work of the orchestra.

“The video is really strange, a bit surreal and dreamlike. And I really like historical clothing and old ways of doing things. I toyed with instrument making for a while,” she says, unveiling a flute made from a hollowed-out gourd, “but in the end I settled on visual volume.

While Farquhar says she’s a stranger to the fashion world, she admits corsets are “having a moment” right now. If the studio seems a little empty right now, it’s because she recently sold off several of her pieces on Instagram to fund the purchase of her new studio mate, a chihuahua named Halloumi.

The nerdy-named pup isn’t his only four-legged muse: One of the Polaroid models is a friend’s horse, which features in Fluttertongue and a landmark work that will appear in another upcoming exhibition.

“His name is Embers – he’s just a little baby,” she said. “I met him one day and became obsessed with him; for months I kept thinking about putting a strawberry on that horse. We put the collar on him, and he was happy for a while, then he went and rolled in a giant puddle.

Embers wears a strawberry in a video by Fluttertongue. Photo: provided

The inherent flamboyance and theatricality of a majestic horse in a strawberry – even one covered in mud – resonated with Farquhar’s time with the ASO. But, at this particular point, she is content not to think too much.

“It brings me a lot of joy, and in my practice right now, I just want it to be fun and silly and hopefully not too serious. I’ve done some serious work before and just need this space to be good and happy. It probably won’t always be like this. But it’s been a year of skill development and play, and then looking back I can see where all the pieces came from.

Fluttertongue is shown on outdoor media screens at the Adelaide Festival Center until August 31 as part of SALA. Chelsea Farquhar will talk about his work and research for the Guildhouse Collections Project at an “in conversation” event at the center at 2 p.m. on August 16 (details here).

In the Studio is a regular series presented by InReview in partnership with a non-profit organization Guild. The series shares interesting stories about South Australian visual artists, artisans and designers, offering insight into their artistic practices and a behind-the-scenes look at their studios or workspaces. Read our previous stories here.

Your support will help us continue the important work of InReview in publishing free professional journalism that celebrates, questions and amplifies the arts and culture in South Australia.