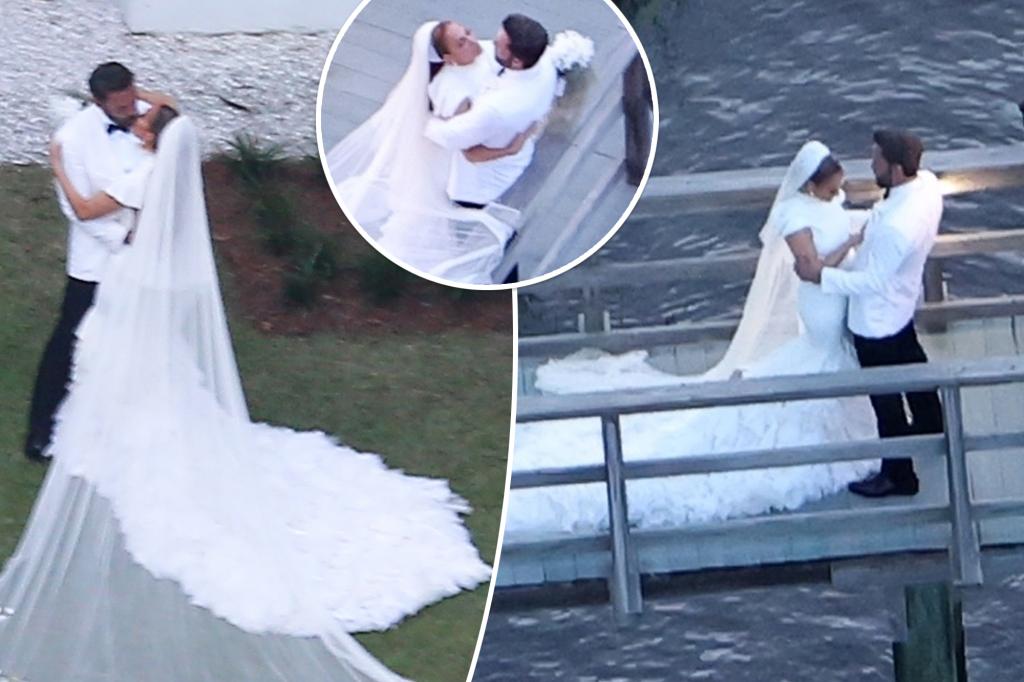 Jennifer Lopez and Ben Affleck tied the knot for the second time on Saturday in an extravagant, star-studded ceremony at the ‘Gone Girl’ actor’s sprawling Georgian home.

The couple tied the knot in a three-day celebration for friends and family at the 87-acre Affleck waterfront estate near Savannah a month after spontaneously eloping in Las Vegas.

Lopez wore an Italian-made Ralph Lauren couture dress for the ceremony, which was presided over by celebrity life coach Jay Shetty.

The weekend wedding party included a welcome dinner on Friday, and guests were to be served a barbecue picnic on Sunday.

But at least one member of Affleck’s family was not present. Younger brother Casey Affleck stayed in Los Angeles over the weekend, according to TMZ.

The lovebirds were spotted earlier on Saturday. The video captured Affleck, dressed in jeans, a beige shirt and with what looked like a shoulder bag, climbing the grand staircase outside the house to Lopez, who – wearing a simple white dress strapless – sat on top. The two could then be seen sharing a kiss.

White seemed to be the theme of the event.

Some guests arrived Saturday afternoon in white Old Savannah Tour trolley buses, while others came in black SUVs, handing guards what looked like invitations. The white cards appeared to feature a design of a bird with its wings spread.

Guests, including director Kevin Smith – who posted a photo of himself on Instagram before the wedding – wore white.

White flowers with long trails of green leaves cascaded over an open outdoor seating area, which featured white flooring and a white piano.

Aerial footage above the big party showed guests dressed in all white outfits as they gathered on a long white driveway leading to the actor’s house, where the festivities appeared to be in full swing.

Photos taken above the palatial estate show Lopez donning a flowing white wedding dress with a sheer veil that stretched several feet behind her, covering the floor.

As Lopez and Affleck descended a walkway built on the ground, their children helped wear the flowing garment, according to one of the images.

The newlyweds held close throughout the ceremony, according to photos, which show them embracing on a wooden walkway that stretches over a body of water adjacent to the sprawling mansion.

The couple first met from 2002 to 2004, rekindled their romance last year and announced their engagement in April. They tied the knot in an intimate wedding at A Little White Wedding Chapel in Sin City on July 16.

The ‘Good Will Hunting’ star, 50, and the ‘Enough’ actress, 53, later celebrated their honeymoon in Paris, where they were spotted canoodling.

On Thursday, a marquee was seen being built on the Oscar-winning actor’s property as workers prepared for the ceremony.

Stars such as Matt Damon and Jimmy Kimmel, Casey Affleck were expected to attend the lovebirds’ second wedding.

Security was tightened throughout the day.

Guards blocked the entrance to Hampton Island, the exclusive enclave where Affleck’s compound is located. Guards checked the IDs of anyone entering and handed out white paper wristbands, as a police officer sat nearby in a car labeled Liberty County Sheriff.

Authorities have set up a three-mile no-fly zone above the plantation-style house where the lavish wedding took place, according to the Daily Mail. The no-fly zone extended within a three-mile radius of the property, the newspaper reported.

Security boats also patrolled the nearby North Newport River, which overlooks the property.

Workers rushing to put the finishing touches on the estate required the installation of dance floors, special lighting, a raft for a fireworks display and the repair of a potholed road. The price was estimated at over $400,000.

Affleck has owned the property since 2003, which was designed by an Atlanta architect to look like a southern plantation. It includes a 6,000 square foot main house known as “the big house”, a 10,000 square foot guest house, a deep water dock and equestrian facilities.

The wedding to Lopez is the second time Affleck has married following his 2018 divorce from Jennifer Garner. Lopez has been married three times previously, including to Marc Anthony, the father of her twins; actor Chris Judd and producer Ajani Noa.

Riceboro resident Joey Norris said he would like to meet Lopez one day.

“They already tried once, didn’t they?” Fall in love. Better luck this time.