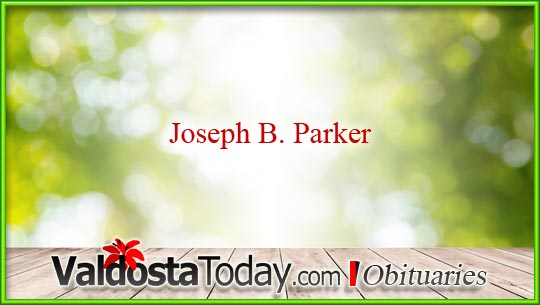 Joseph B. “Jake” Parker, 93, of Valdosta, died on Monday June 7, 2021 following a long illness. Born August 15, 1927 in Brooks County to the late Joe & Cora Alma Parker, he lived most of his life in Valdosta and County Lowndes. Jake graduated from Pine Grove High School in 1945, playing on the basketball team.
As a young man, he played baseball in the Twin Rivers League and was spotted by Major League teams.
After high school, Jake started working for the railroad. After a brief career there, he moved to Columbus, Georgia to spend time with his sister Ruth and start a new career. It was while living in Columbus that he met the love of his life, former Dorothy Culpepper. They were married in Phenix City, Alabama on November 23, 1955.
They moved to Valdosta in 1959, where he quickly began working as an insurance agent with Independent Life Insurance Company. He worked at Independent for almost 30 years and was promoted to Staff Manager in the early 1960s. He retired from the company in 1979.
After his retirement he focused on what he loved to do, working on his farm, with his cows, pigs, horses and hay. Jake viewed work as a noble and necessary activity, both for himself and for others. His favorite hobbies were raccoon (coon) hunting, fishing, and football at Lowndes High School. He was also a skilled “horse dealer” when it came to trucks, farm equipment and tractors. He was a member of the Lakeland Church of Christ and a former member of the Central Avenue Church of Christ.
Survivors include his 65-year-old wife, Dorothy Parker of Valdosta; two step-sons and daughters-in-law, Steven & Debby Parker, and Rusty & Charlotte Parker, all of Valdosta; his daughter, Karen Parker of Valdosta; five grandchildren, Courtney (& Brad) Fleming, Zach (& Emily) Parker, Casey (& Aaron) Horne, Cole (& Gabi) Parker and Jake Parker; 11 great-grandchildren as well as his two â€œadoptedâ€ granddaughters, Masha and Dasha Bzenyuk.
Also left are two sisters and a brother-in-law, Evelyn Brinson and Kathleen & Frank Culpepper; one brother-in-law and one sister-in-law, James & Sylvia Parker; and many nieces and nephews.
Mr. Parker is predeceased by his grandson, Austin Parker and his sisters, Florene DeLoach, Inez Steedley, Ruth Bush and his brother Elmer Parker.

Mr. Parker’s funeral will be at 2 p.m. on Friday June 11, 2021 at Central Avenue Church of Christ. Mr. David Abbott and Mr. Bryan Jarvis will officiate. After the service, the family will travel to Cat Creek Cemetery for interment. The family will receive friends at Central Avenue Church of Christ on Thursday evening June 10 from 5 to 7 p.m. Flowers will be accepted, or in lieu of flowers, donations can be made to Hospice of South Georgia, 2263 Pineview Drive, Valdosta, GA 31602. Condolences can be passed on to the family on the obituary page of www.mclanecares.com Carson McLane Funeral Home.