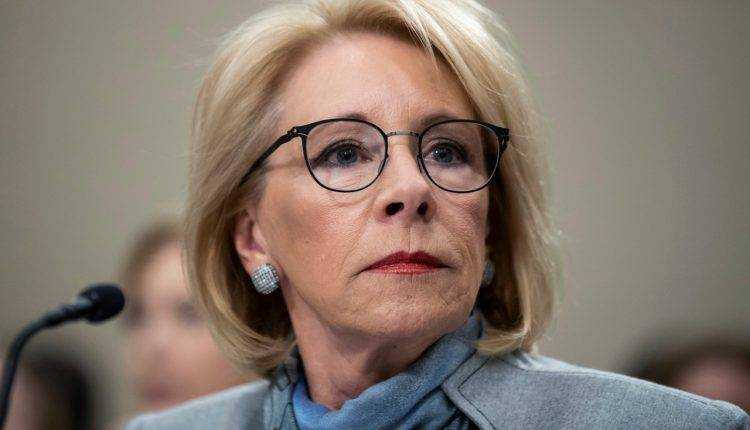 Judge DeVos for rejecting 94% of requests for loan relief

This is an archived article and the information in the article may be out of date. Please look at the history’s timestamp to see when it was last updated.

Months after promising to process a backlog of 160,000 loan forgiveness requests from students who say they have been defrauded by their schools, the US Department of Education has rejected 94% of the requests it reviewed, federal judge says which calls for a justification of the “dazzling pace” of denials.

He said that although Education Secretary Betsy DeVos blamed the backlog on the hard work of processing complaints, she has now “charged out the door, issuing superficial denial notices that are totally devoid of explanation. significant at a breakneck pace.

The education ministry said it was reviewing the decision. Spokeswoman Angela Morabito said many applications have been submitted by borrowers who have participated in ineligible programs or who have not made a valid loan cancellation request.

“The mere fact that an application has been filed does not make it valid and eligible for taxpayer-funded relief,” she said in a statement. “The Ministry is following the publicly available process to resolve complaints as quickly as possible, so that students who are eligible and who have been wronged receive the relief they deserve.

The dispute stems from a 2019 lawsuit filed by 160,000 borrowers who claim the education ministry illegally blocked their requests for loan relief. The claims were filed under a program known as Borrower Defense, which forgives federal student loans to borrowers cheated by their colleges. It is most often used by students who attended for-profit colleges.

In one proposed regulation in April, the Department of Education agreed to deal with the backlog of claims within 18 months. But Alsup abandoned the deal on Monday, saying it was undermined by the recent wave of refusals. Instead, he called for the trial to continue and allowed the testimony of up to five ministry officials to explain the refusals.

“We need to know what’s really going on,” wrote Alsup, who was appointed to the court by President Bill Clinton. He said DeVos won’t be required to appear for filing “at this time,” but suggested it might be necessary later.

DeVos set out to overhaul the loan forgiveness program in 2017 and last year released new rules that made it harder for borrowers to cancel loans. In the meantime, complaints were piling up. When the lawsuit was filed, it had been a year since the department had made a final decision on any claim.

The program had been expanded by President Barack Obama to wipe out loans given to students attending the chain of Corinthian colleges and other for-profit colleges who had lied about the success of their graduates. DeVos opposed the expansion, saying it made it too easy for students to cut their loans at the expense of taxpayers.

Alsup’s decision was based on the department’s latest update on its work to clear the backlog. By August, he wrote, the agency had rejected 74,000 claims related to the lawsuit while allowing 4,400, a rejection rate of 94%.

The rejections were issued through standardized letters with information on how to appeal the decision, but Alsup said the letters did not explain the decision. This leaves borrowers in a “disturbing Kafkaesque” situation, he wrote.

Alsup said he plans to ban the ministry from issuing further refusals until the case is decided. He called on both sides to present arguments around the issue.

The Harvard Law School’s Predatory Student Loans Project, which represents the borrowers in the lawsuit, said it looked forward to filing agency officials for an explanation for their actions.

“The group members in this case have suffered prejudice at every turn, but in this court order they finally see a change in the tides after years of waiting for justice,” said Eileen Connor, chief legal officer. of the group.