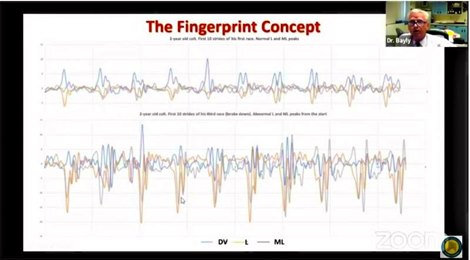 A team of researchers aiming to identify racehorses at risk of catastrophic or career-ending injury through gait monitoring presented the Kentucky Equine Drug Research Council with funding Sept. 23 for what they consider a final thrust towards realizing their life-saving potential. program.

The KEDRC operates under the jurisdiction of the Kentucky Horse Racing Commission, serving by reviewing and making recommendations on drug policy and reviewing research projects eligible for KHRC funding.

The gait monitoring presentation was made by Dr. Warwick Bayly, Professor in the Department of Veterinary Clinical Services, Washington State University College of Veterinary Medicine, and Dr. David Lambert, Veterinarian and CEO of StrideSAFE, the company that developed the biometric sensor. system that collects gait analysis data.

“This is the fourth year that Dr. Lambert and others have researched ways to identify the horses most at risk of suffering a major career end or, in the worst case, catastrophic musculoskeletal injury over the course of the year. of their (race) preparation,” Bayly said. “We felt we had to do it. It’s the right thing to do.”

The StrideSAFE system started in 2020 with trials conducted at emerald bottom. Using sensors on the legs, behind the girth and under the saddle pad, the team collected the data needed to create a single monitor that fits in the saddle towel and measures acceleration for three different planes: longitudinal (up and down), vertical direction. (front and back) and medial-lateral (side to side). The data collected creates a stride profile that Bayly calls a stride “fingerprint”.

These fingerprints can then be compared to an “ideal stride”, which is a composite created from the analysis of 30 grade 1 and grade 2 winners.

The risk factor for a “red light” horse suffering from a career-ending or catastrophic injury that rated a standard devotion of 6-7.9 was rated at 142 compared to “green light” horses that have rated one.

Armed with this system, Bayly said it’s time to create a convenient, cost-effective and automated system that will flag applicants for further examination by a veterinarian or with CT or scintigraphy. He proposed a study of 2,000 horses which, according to the NYRA study, should include about 12% red flag stride deviations. Out of approximately 240 red flag horses, veterinary inspection will likely identify 20 that require further examinations and 10 of them will likely require advanced imaging as part of their diagnosis.

“Long term, we want to get the breeze data so every horse can race with a green flag,” Lambert said. “You would then be pretty sure they would all move safely, which is important for big televised races.”

The board also heard a presentation from Dr. Scott Stanley, who directs the Equine Analytical Chemistry Laboratory at the University of Kentucky, who proposed research aimed at developing gene doping detection methodologies that would identify the administration of transgenes. The test would identify genes synthesized to affect muscle growth, cell growth and tissue repair, oxidative capacity and metabolism.

“The research aims to develop methodology using novel techniques that have been developed and proven to detect transgenes for EPO (erythropoietin),” Stanley said, adding that he had started working in collaboration with an LRC lab. outside Tokyo which has eight members. team working on gene doping detection in its genetic analysis section.

“They have been involved with IFHA and with collaborations in Australia, Hong Kong and France,” he said. “I have worked with them for five years and they are willing to share their methodology. They pioneered the field of equine anti-doping for digital droplet PCR methodology and we hope to work with them to expand testing to beyond erythropoietin to other targets.”

One of the long-term goals, he added, is to include gene doping results in the Equine Biological Passport database.

Stanley estimated it would take up to a year to acquire the droplet digital PCR equipment and develop the methodology and another year to validate the tests using KHRC blood samples and begin administering the tests. .

The Equine Drug Research Council did not take any votes, but closed the meeting by agreeing to take further questions from council members. A final review of the proposals and a vote on whether to support them for funding will take place at a later meeting.