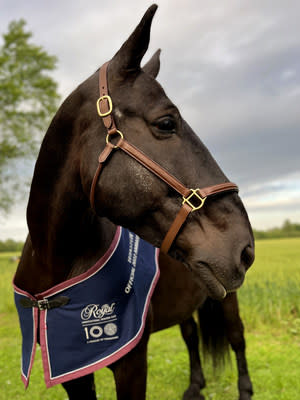 The Royal Agricultural Winter Fair announces a workhorse as this year’s ambassador, in addition to new programming for the landmark 100th anniversary celebration – which is taking place November 4-13, 2022at Exhibition’s venue, Toronto

TORONTO, June 28, 2022 /CNW/ – The countdown to 100 years of the Royal Agricultural Winter Faire The anniversary is officially launched! With just over 100 days until the doors open, the Royal Agricultural Winter Fair is proud to unveil the 2022 Royal Ambassador, Winston. The 26-year-old Percheron cross measures over 1.7 meters and will be a key figure in the centenary celebration organized in from Toronto Exhibition place from November 4-13. Winston joins a line of beloved royal ambassadors, which includes Turbo the goat, Lil’ Ben the miniature horse and the rooster duo, The Royal Duke and his son The Royal Roy.

“The Royal is an iconic Canadian event that celebrates the best of local food, agriculture and equine excellence this country has to offer. And after a two-year hiatus, we’re back bigger and better than ever as we celebrate our 100e anniversary,” said Charlie Johnson, Managing Director, The Royal Agricultural Winter Fair. “Given the significance of this year’s Fair, we knew we needed a larger than life ambassador to embody ‘A Century of Champions’. We are incredibly proud to have Winston on board – a horse of majestic trait that is an icon in this city’s history.”

Offered through a partnership between the Royal and the Toronto Sun, Winston joined the Toronto Police Service Mounted Unit in 1999 and deservedly received the name “Winter Sun” – nicknamed Winston. After 17 years of service, he retired in 2016, making Winston the longest-serving mount in the unit.

In addition to announcing the Royal Ambassador, the fair is pleased to share further information on the flagship initiatives taking place in November:

For media accreditation at this year’s Fair, visit www.royalfair.org/media