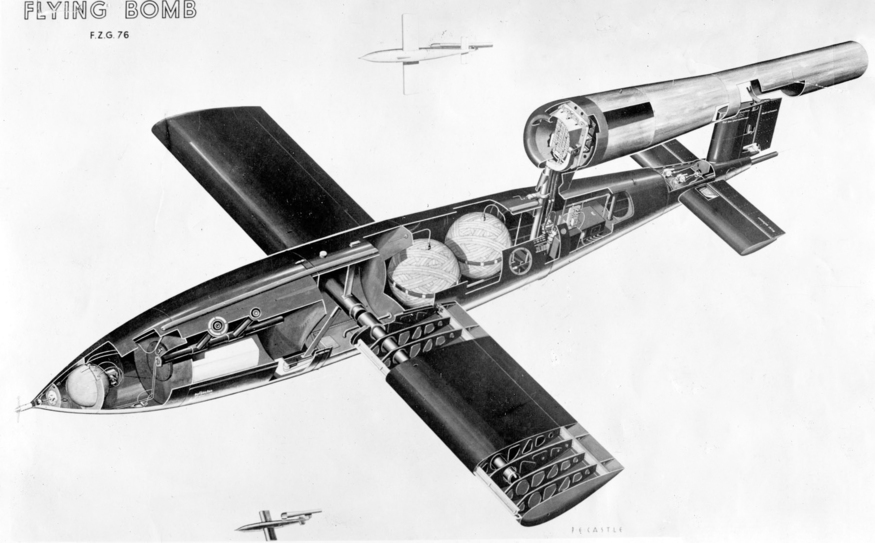 “My Narrow Escape from a V1 Flying Bomb”

One sunny morning in June 1944, at the age of 11, I was attending an art lesson at John Lyon School in Harrow, when suddenly, without warning, my head was filled with the roar of the engine of a an unmanned V1 flying bomb carrying a ton of deadly bombs. powerful explosives.

He had come hurriedly to the brow of the hill on which the school was situated. At one point I was quietly trying to draw a horse’s head, then my head was filled with the roar of the plane’s engine, which made me feel like my head was going to explode. My heart started beating incredibly fast and was like a jack-in-the-box in my throat. About a second later, the plane’s engine stopped, followed by the most eerie silence and expectation I’ve ever experienced. It was as if I was in a great void where time did not exist. ‘Boys! Boys!’ the captain, shouted Mr. Phillips. ‘Fast! Get under your desks!

It was too late to run for the shelters. In an instant, my world is reduced to me. Terrified beyond description, scared beyond thought, my mind filled with terror and my heart pounding so hard it felt like it was about to burst from my mouth, I dropped to the ground and crouched under my desk with my head between my knees, waiting for the bomb to go off and blow me and my classmates up. Please, my God, I don’t want to die. Please God I don’t want to die was all I could think of.

The next moment there was a huge explosion followed by the clink of falling glass around us. Crouching under my desk, I muttered one last plea to my maker: “God, have mercy on me… Please have mercy on me… I don’t want to die.”

An eerie silence followed the explosion in which I expected the building to collapse on top of us. But he didn’t fall apart, and I realized that maybe I was going to live, and the boys on either side of me were alive, and maybe were going to live.

I crawled out from under my desk, and the next moment, along with the rest of the boys in the class, I was up, taking stock and looking around to see what damage had been done to the building. I was alive! I had survived! I hadn’t even been hurt! We were all alive! We had all survived!

Although we were still too stunned to say much, the sense of relief among us was almost palpable. The building hadn’t collapsed, the roof hadn’t collapsed on top of us, but most of the windows had been blown out and rains of glass rained down on us.

As we realized we were safe, our minds started to work again and we started chatting nervously with the boys closest to us.

Very carefully, we picked up glass from each other. Then, glass crackling beneath our feet, we began to move around the classroom, screaming and laughing in relief.

An elderly boy, a prefect, came into the classroom and spoke to Mr. Phillips for a moment.

‘Boys!’ cried Mr. Phillips. “You were splendid! The director wants to see you all in the main hall of the New Building. Please file in an orderly manner.

The manager addressed us in the main hall. “We will say a brief prayer for our delivery,” he said. “Then you can go home for two days while the school is cleaned. There will probably be no glass in the windows for a while when you return.

Only one boy in my class had been injured. It was said that a tiny shard of glass entered his back and as a result of the shock he developed tuberculosis.

The bomb had slid 300 or 400 meters beyond the school playground and hit a row of houses at the bottom of the hill, destroying three and killing two or three people.

The above is an excerpt from Memories of a wartime childhood in London by Douglas Model, published by The History Press, RRP £12.99.

10 best deals for shopping this weekend