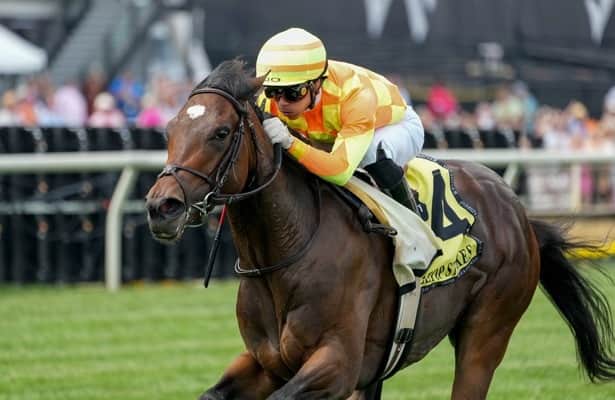 The home of celebrity chef Bobby Flay White Pizza will make his expected comeback after an international attempt at Royal Ascot in Saturday’s 28th race of Year 2, $200,000 tip of the sands for 3-year-old fillies running nine furlongs on indoor turf from Belmont to the Big A.

Pizza Bianca has not raced since finishing eighth in the Coronation Cup (G1) on June 17 at the prestigious Royal Ascot meeting in England. The distant effort was the dark bay or brown girl of Fastnet Rock’s first finish off the chart in six career starts and came after picking up a Hilltop victory on May 20 at Pimlico Racecourse.

A smart winning run from Jose Ortiz at last year’s Breeders’ Cup Juvenile Fillies Turf in Del Mar put Pizza Bianca on the map after a second-place finish to Natalma (G1) at Woodbine in his second life start. In the Juvenile Fillies Turf, Pizza Bianca broke away from the rail in the pack of 14, was last three quarters from the take-off point, split opponents and smashed through traffic to win half a length and provide trainer Christophe Clement with his first Breeders’ Cup triumph.

“She took a break after Ascot. We brought her back and gave her some time,” said Clement, who saddled Discreet Marq (2013) and Rutherian (2007) to Sands Point scores. “I tried to get her ready for Saratoga, but she needed more time than that. She’s doing well and we’re excited to have her back.

Jose Ortiz, the pilot aboard Pizza Bianca in his last four starts, will start from post 9.

Clement also sends Canisy, who takes a fifth-place finish to McKulick in the 11-stadium Jockey Club Oaks Invitational (G3) on Sept. 17 at Belmont at the Big A.

The entry point dark bay displayed different tactics on his two trips to the winner’s circle, coming from off-the-beat to capture his career debut 1 1/16 mile on May 1 at Belmont Park before defeat the winners in gate-to-wire fashion ranging nine furlongs on July 14 in Saratoga.

“She is training well. We tried to run her long last time, and we are reducing her in distance, which should be more to her liking,” Clement said.

Hall of Famer Javier Castellano has ridden Canisy in five lifetime starts and will return to the saddle once again from position 4.

Vergara, by Noble Mission, will return to Aqueduct for the first time since November when Tepin was captured. Third behind Pizza Bianca in the Hilltop, Vergara got some black-type graduated bets when he beat a header into Ontario Colleen (G3) on Aug. 6 at Woodbine.

Vergara’s triumph in the Dueling Grounds Oaks was his first after the Sands Point distance. A close second down the straight, Vergara was in charge around the far corner and fended off a late rally from returning rival Skims to win by a header under Joel Rosario.

“It’s a tricky track. I have a love-hate relationship with this place myself, but she sure seemed to handle it,” Motion said of Kentucky Downs. “She’s always shown that kind of talent, so it wasn’t really a surprise. Joel gave her a great lap. I think she loves Aqueduct and the mile and an eighth distance, and she doesn’t care of a bit of land.

Rosario will return aboard Vergara from Station 2.

Lady Baffled will be making her grass debut as well as her Motion debut. Previously trained by Kent Sweezey, the daughter of Frosted scores a triumph against the winners on August 19 at the main track at Monmouth Park.

Bred in Kentucky by Twin Creeks Farm, Lady Baffled is out of mare Graydar Baffling, a half-sister to Grade 1 winner and prominent sire Constitution.

Starting from position 8, Lady Baffled will be ridden by Kendrick Carmouche.

Trainer Tom Albertrani will be chasing his fourth Sands Point conquest riding the Hail To at Woodslane Farm. Albertrani has previously won this race with Raw Silk (2008), Gozzip Girl (2019) and Better Lucky (2012).

Kitten’s Joy’s Hail To caused a 19-1 loss by beating the oldies in a first-tier indemnity in Saratoga on September 2. Transient next winner’s rally to win by half a length. The victory, his first triumph against winners, recorded a record 83 Beyer Speed ​​Figure.

Hail To is out of Dynaformer broodmare Dynaire, making her a full sister to long-distance specialist Sadler’s Joy, who captured Sword Dancer (G1) at Saratoga and Pan American (G2) at Gulfstream Park, both events of 12 stadia, for Albertrani.

Eminent Victor will be looking to give four-time Eclipse Award-winning trainer Chad Brown his sixth victory at Sands Point, coming out of position 3 under Manny Franco.

Eminent Victor finished third in the Natalma (G1) as a 2-year-old and made his 3-year-old debut winner in the Wild Applause on June 25 at Belmont Park. Mr. Z’s daughter was narrowly beaten in the next out Lake George (G3) on July 22 at Saratoga, finishing a nose behind her stablemate Dolce Zel. She finished fifth in difficulty at Lake Placid (G2) on August 20 at Spa.