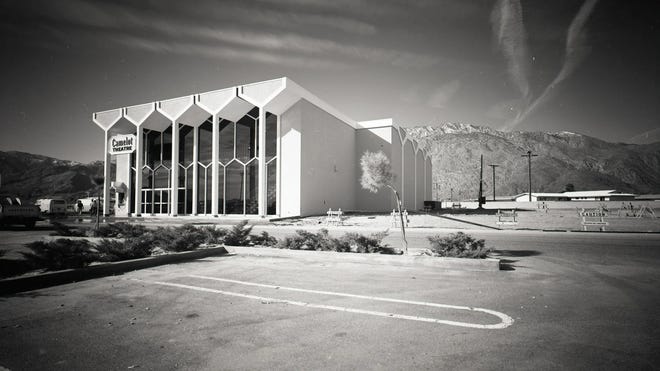 Webster’s Dictionary defines “Camelot” as the court of King Arthur, but also as a time, place or atmosphere of idyllic bliss. That the name was chosen in the mid-1960s for a movie palace in Palm Springs makes sense. Jackie Kennedy had used the word to define her husband’s heritage and times. Aspiring to bring art and entertainment to a literal wasteland and area of ​​cultural scarcity made the name apt.

In May 1966, The Desert Sun announced, “Swank Theater on Tap for Palm Springs.” Reputed to be one of the most lavish movie theaters in America, the grand opening was scheduled in a few weeks by the Metropolitan Theaters Corporation.

The theater would be ultra-modern in every way. The intimate interiors would have the latest technical and design developments, with advanced projection systems and giant screens.

Designed by Mayer and Kanner, Architects, AIA, “Camelot will have an exterior with solar glass and ceramic tile; an upper level with luxurious lounges and an art gallery; and a 650-seat auditorium – including rocking chairs… Interior design by Ben Mayer Associates, color consultants, is in rich greens and blues. Carpets, specially designed, are woven abroad.

Unimaginable today that construction could be so fast; the theater was scheduled to open Thanksgiving week that same year. The Camelot boasted a first-run policy showing the best of Hollywood and world film production. The Camelot has become a valuable cultural center for the desert.

Several decades later, the economic downturn made doing business difficult. The Coachella Valley was in the doldrums. The Plaza and the village theaters were closed. Downtown Palm Springs was a wasteland of vanished T-shirt shops and storefronts. The disastrous Fashion Plaza mall destroyed The Desert Inn and then repeatedly went bankrupt, destroying downtown.

In the late 1990s, despite the recession and those declaring the wilderness economically and otherwise dead, Ric and Rozene Supple bravely purchased the Camelot Theater with the aspiration to continue providing a beautiful movie theater for the best in cinema to the community.

Rozene first arrived in the desert in 1940 with her parents, George and Francis Richards, when she was 16 years old. His father suffered from various health problems and the desert was therapeutic. They bought property at Smoke Tree Ranch and built a house. There, Rozene would make friends that would last a lifetime, including Bud Hoover, with whom she would ride her favorite horse, Diamond, across the wide-open desert. She attended Palm Springs High School that year and went to school on occasion.

His father had made a considerable fortune in broadcasting (and he owned Detroit’s first NFL team, the Detroit Lions). After graduating from Stanford, Rozene would learn broadcasting through her many stations. Working at the bustling KMPC, her station in Hollywood, she got to know all the major bands and radio personalities of the day on their tours in Los Angeles, including Les Brown and his Band of Renown. She worked for Sonny Burke Music Inc. and Decca Records for a stint, remaining friends with Sonny and Les for the rest of their lives.

Rozene married Sibley Moore, whom she met at Smoke Tree Ranch, but was widowed at a young age. At a Stanford reunion after Moore’s death, she reconnected with Ric Supple, whom she had gone on a college date with. He had brought her home late and she had not gone out with him again. Upon reuniting, they realized they were both private and all these decades later they decided to try another date. Soon after, they got married and decided to make the desert their permanent home in 1974.

Rozene had learned a lot from her father’s radio business and decided to buy her own station, KPAL AM in Palm Springs. She changed the name to KPSI which stood for “Keeping Palm Springs Informed”. At a time when women weren’t necessarily taken seriously, she became a force in business.

R&R Broadcasting, named after Ric and Rozene, would expand to two FM stations and three AM stations: KDES, Mix 100.5, KPSI, KPTR and KWXY. Their success in the radio business has brought them deeper into the community. She crossed paths with many actors and athletes, politicians and industrialists.

His parents had cultivated an appreciation for the arts and music in Rozene. But in 1940s Los Angeles, she fell in love with movies. As a result, Rozene and Ric purchased the Camelot Theater to offer not only first-run films, but art and foreign films as well. It didn’t matter that there weren’t enough people in Palm Springs to support a movie theater. Ideally, there still had to be one according to Rozene, and she was willing to pay for it.

Ric and Rozene were often seen at Camelot sitting unassumingly in the very last row near the door, allowing for a quick start as the credits rolled. Watching a movie at Camelot was special. The theater was vast and could even be described as grand. The popcorn was topped with real butter. Upstairs was a bar, ubiquitous in Palm Springs in earlier times. The experience was reminiscent of a more graceful and idyllic time.

Constantly concocting new initiatives, the Supples inaugurated the Palm Springs Cultural Center as a vehicle to perpetuate arts and culture in the desert. The Camelot Theater was renamed but would remain true to its original name.

Several film festivals would find their place in the Cultural Center, such as the American Documentary Film Festival and the Arthur Lyons Black Film Festival. “Sordid Lives” would play there year after year, becoming a campy town favorite heralding the Cinema Diverse festival. The cultural center would also add live theater, music events, art exhibitions and lectures to its offerings. Rozene’s son, Rick Moore, would create and bring the Farmer’s Market to the Cultural Center, further expanding its offerings. The Cultural Center was the culmination of a lifetime of effort and philanthropy.

This week, months shy of her 98th birthday, Rozene passed away peacefully. She is deeply mourned and will be greatly missed. For the past few weeks, she was always following the news, always talking about the future, always dreaming of the next dream: always of a kind of Camelot. Never satisfied with her accomplishments, Rozene’s legacy is one of immense service and contribution. Thanks to his vision and generosity, the desert is a richer and even more idyllic cultural place.

Tracy Conrad is president of the Palm Springs Historical Society. The Memories Thanks column appears on Sundays in The Desert Sun. Write to him at pshstracy@gmail.com.