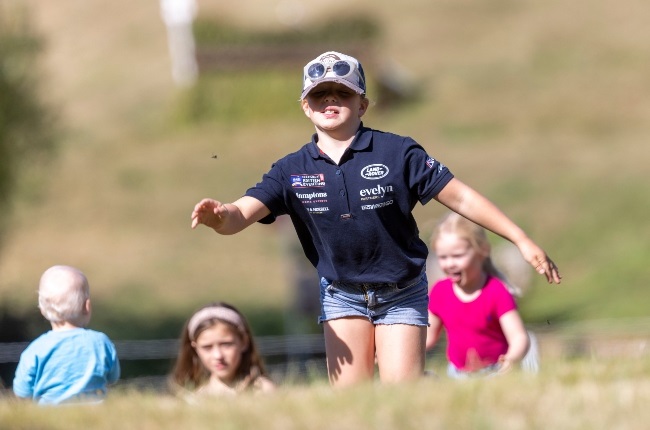 Tindall children, Mia (in navy blue), Lena (in pink) and Lucas (in light blue), stole the show at the Festival of British Eventing, which their mother, Zara, attended over the weekend. (PHOTO: Magazine Features)

They are considered one of the closest royal families.

And this weekend, the Queen’s eldest granddaughter, Zara, and her husband, Mike Tindall, and their adorable offspring proved it once again.

As Zara took part in the Festival of British Eventing at Gatcombe Park over the weekend, Mike and their three children were spotted blending into the crowd as they cheered on their riding mum. The 43-year-old retired England rugby player was in full dad mode and had his hands full with daughters Mia (8) and Lena (4) and son Lucas (1).

Lucas seems to have stolen the show as he was clearly having fun with his family. At one point, Mike was seen tossing a clearly delighted Lucas into the air as Mia watched. Mike Tindall was in dad mode as he watched the kids while his wife, Zara Tindall, competed in equestrian events this weekend. Here he is with his son Lucas. (PHOTO: Magazine Features)

But the boys didn’t have all the fun. Mike also made sure to take Lena for a ride on the Ferris wheel while Mia joined her dad and Lucas for another fun ride.

They looked like any other family having fun in the sun. Mike took his youngest daughter, Lena, for a ride on the Ferris wheel. (PHOTO: Magazine Features)

Princess Anne (71) was also on hand to support her daughter and was dressed very casually at the event at the Princess Royal’s estate.

The annual event, now in its 28th year, takes place on a course designed by Princess Anne, an avid rider who competed in equestrian events at the 1976 Olympics. It includes events such as dressage, show jumping and different phases of cross-country.

Zara (41), also an Olympian, competed on horseback on the opening day of the festival. And she looked like she couldn’t be more proud to have her whole family present to watch her. At one point, Zara, who was wearing outfits to match her son, was seen smiling as she watched Lucas stroke a horse.

This is not the first time that the children have encouraged their mother. In April this year, Mike and the children were spotted supporting Zara at the Barefoot Retreats Burnham Market International Horse Trials in Norfolk. Zara has always been open about her love of horses and riding, especially at the professional level. “I like big occasions because I like the pressure – sitting on a horse that you know is good enough, you are fully prepared, you are riding for your country – it’s what your dreams are made of,” she said in 2020.

Even better than that is that she has the cutest supporting team cheering from the sidelines.