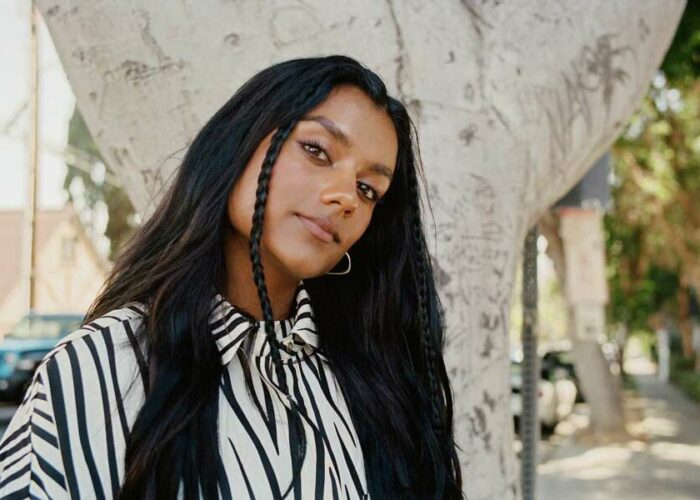 Actress Simone Ashley in West Hollywood, California in April 2022. Ashley, who plays fiercely independent Kate Sharma in the new season of ?’Bridgerton,? a young woman who has no time to love and who struggles when confronted with it. (Rosie Marks/The New York Times)

Simone Ashley, who plays fiercely independent Kate Sharma in the new season of “Bridgerton,” has found a lot to tell in her character – a young woman who has no time for love and struggles when she faces it.

“I’m still on the same path, learning that balance of being serious and brave and stubborn and strong, but also sharing space and relating to people and letting people in,” Ashley, 27, said.

Season 2, which arrived on Netflix in late March, centers on Kate and her little sister, Edwina (Charithra Chandran), who traveled with their mother from India to find a husband for Sharma’s youngest daughter. But Kate eventually develops feelings for Anthony Bridgerton (Jonathan Bailey), the Viscount who is courting Edwina, and does her best to deny those emotions.

While this season features significantly fewer steamy scenes than the first, it still features plenty of juicy gossip, outlandish styling and instrumental pop covers, as well as several nods to South Asian culture.

Ashley, who grew up in England, was instrumental in “Sex Education,” a Netflix comedy that follows the lives of high school students, but “Bridgerton” is her first time playing a main character in a major production. In a video interview last week, Ashley opened up about building chemistry with her co-star and the importance of on-screen representation. This conversation has been condensed and edited.

Q: What were your favorite scenes from this season of “Bridgerton”?

A: I love the scene where Kate and Anthony dance for the first time. And the bee sting scene – I think that’s such a pivotal point in the story. The stakes are really high, and they realize that they have feelings for each other and now there is this barrier between everything they have worked for. And, I love all the riding scenes.

Q: What was the hardest scene to shoot?

A: There were never any awkward moments. Uncomfortable, perhaps. With the mud scene, we were just covered in mud all day, but we really got used to it by the second take. I try never to indulge in thoughts of unease or discomfort. I just tried to keep going and find the positives and see it as a challenge and have fun with it so I could go away and know I did my best.

Q: As a viewer, the chemistry between Kate and Anthony was palpable. What was it like when you first met Jonathan Bailey?

A: We met for our chemistry reading, and it was so weird. We sat on a couch and did three scenes. I think we did the horse riding scene where Kate and Anthony first met, the library scene and, god, I can’t remember the last one. We just clicked.

A: We worked with Lizzy Talbot, who was an amazing intimacy coordinator. She really encouraged us to portray what it’s like for a woman to be empowered and to communicate that feeling of knowing what she wants. And I loved that about Kate – she’s always been a very self-realized woman, and I think she’s incredibly sexy in that sense. She has a sense of wit in her that fascinates Anthony, and it’s such a safe space for her to share that with him and have fun with it and receive pleasure herself.

I found that incredibly empowering, especially as a woman of color. I’m so proud of my body, and I love my body. I’m thankful he’s healthy and strong enough to get me up every day and do the things I need to do.

Q: What are the great love books or films that have influenced your view of love?

A: I grew up watching a lot of Disney classics, a lot of classic movies, and a lot of musicals. I think we all love to see humans overcome anything that keeps them from following their hearts.

Q: Which heroines have you admired?

A: There was something about the character of Uma Thurman in “Kill Bill” that I didn’t fully understand but fascinated me. She was a woman who was so focused on her goal, and that was to have her baby and get revenge too, but we’re not going to dive into that. I thought she was so serious and overcame everything, physically or mentally. And I remember being a kid and watching that – being really inspired by her.

Q: Women of color online have spoken about how much it means to them to see you, a dark-skinned Indian, star in such a widely watched Netflix show. What does this mean to you?

A: I am so grateful and wonderfully overwhelmed by the response we received. I’m very proud of my heritage, and I’m proud that there are effects that I’ve had, just me doing my job, especially if it’s positive, and uplifting other women and making them feel seen .

Q: The conversation surrounding race at “Bridgerton” seems to have two sides. Some say it did wonders for the portrayal, while others argue the colorblind cast isn’t used to make a bigger point in the show. How do you see the representation in the series?

A: This is a 100% color-conscious cast, not color blind. We recognize the fact that these characters are Indian and they are women of color, but it’s done so well because when the Sharmas come in, they fit right in. It is not on the nose that they come from India. And it’s celebrated in so many different ways. We certainly weren’t brought to this series as two Tamil women for it to be completely ignored. It’s celebrated completely in everything from the costumes to the makeup to the script and the scenes.

Q: Many South Asian viewers loved the show’s nods to Indian culture, including conversations about chai, the fabric from which the Sharmas’ dresses were made, and the inclusion of ” Kabhi Khushi Kabhie Gham” in the soundtrack. Did any of these moments in particular stand out to you?

A: I love the scene where Kate applies coconut oil to Edwina’s hair. This scene is such a shift in the script where you see Edwina’s frustration and determination to become the viscountess. This is where Kate begins to lose control, and Edwina begins to take charge of this plan. Everything changes then, but at the same time, it happens to be a scene where Kate applies coconut oil to Edwina’s hair. I’m sure women from so many different backgrounds resonate with it. It’s such an intimate bonding moment between two women – two sisters – that I think a lot of women can relate to.

Q: What is a passion outside of acting for you?

A: I love to sing. I like cooking. I am quite sporty and very outgoing. The perfect day for me would just be spending hours in the sun and going for a swim.

A: I love fashion. I like clothes. It’s a part of my job that I’m so privileged and grateful to be able to explore. I learned so much about myself and fashion in general along the way. And I love the few red carpet moments I’ve had. It becomes all the more exciting to think: what am I going to do next? And what kind of things do I want to explore? What kind of message or feelings do I want to convey?

Q: Which director would you like to work with?

A: I have a few. I would say Greta Gerwig, Quentin Tarantino, Mimi Cave. Jeremy O. Harris is brilliant. I could go on, but I’ll leave it at that.