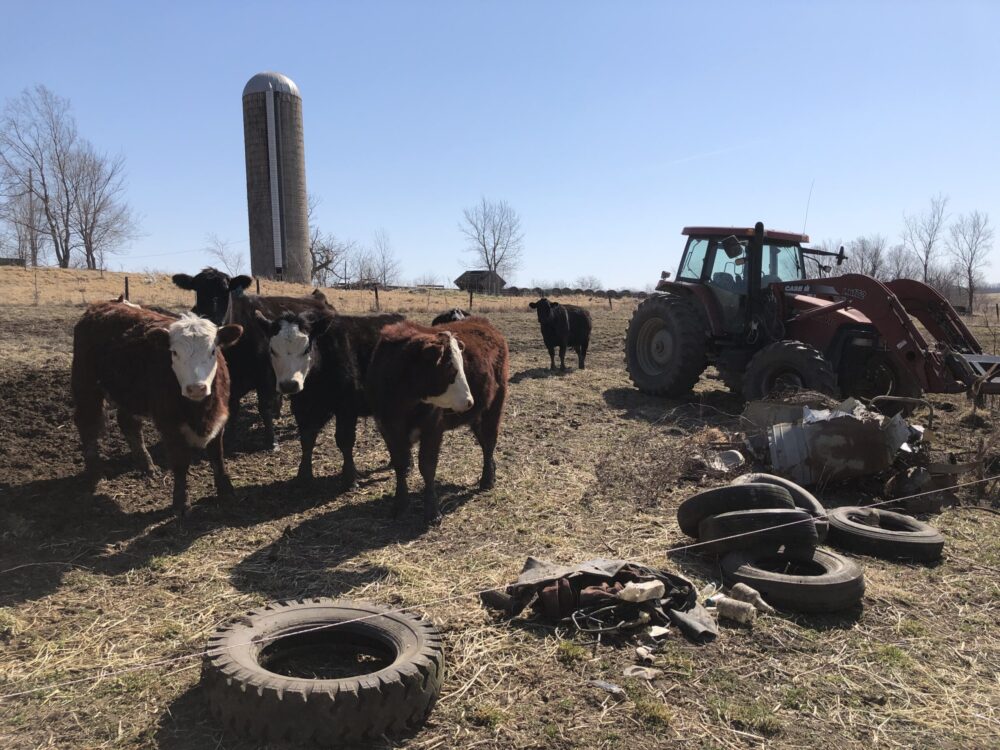 Talking Trash: We Don’t Have to Treat Our Farms Like Landfills

Here’s one thing I think about all the time when I work on our farm: garbage. No “waste” as in the amount of manure generated by the animals (there is a lot of it, but we move our cattle and goats several times a week and they are on pasture 365 days a year so there is no not a single place flooded with sh– like in a feedlot). I also don’t think too much about the kinds of waste that many of our neighbors produce on their corn and soybean farms – the sacks of seed sacks and the giant plastic jugs of chemicals they use – although I should probably think about it more.

No, it is the waste that has been dumped on the farm by humans over the past decades that occupies my thoughts. Old machines parked in the field for “one day” someone to need, now rusty with trees growing through. Concrete carefully poured by one generation, then dug up by bulldozers and dumped into the creek three decades later. All those plastic oil bottles, the bolts and nuts used a generation ago, the broken axle and the car sitting in the field. Oh and the tires. Don’t forget the dang tires (sigh).

My husband, John, grew up on the farm and reports that the volume of shit dumped in fields and waterways skyrocketed between his grandfather’s time and our time now as stewards of the land. At first, John’s grandfather only threw away glass bottles and china jars – there was no plastic to casually throw away, and metals were too scarce to think of tossing into the gutter. But over the past 70 years, John’s father, like most Americans, learned that he could easily buy things and use them until they broke, then throw them aside. Fixing plastics and a lot of machinery costs more than buying a new one to replace the old one.

But even with the best of intentions and less consumption, much of farming comes down to redoing and undoing human labor. I think of the hordes of energy it took farmers to erect a fence: to cut the wooden posts, dig the holes and tie the wire. Now we expend hordes of energy undoing it, winding up barbed wire that snags wildlife, pulling up old poles, digging in new ones.

I try to imagine the resources spent to extract the steel used to build a baler or an auger. How the machine was trucked to the farm for use in the fields and then later when the item became obsolete in the face of ‘progress’ it was dumped in the ditch. More gas and time is now spent trying to get it out, the tractor perched precariously on the bank of the waterway, the links of the log chain wrapped around the old baler as it swings like a giant cat toy in the air. Even more labor and money is spent transporting the rusty heap to the scrap yard where it is buried, at least for now, and where we receive fractions of a penny per pound for the item and for our labor .

Sometimes I think I’d like to go back in time to when the horse-drawn mower was abandoned where it stands today; it’s been so long since years of water and mud have enveloped it so deeply in the earth that it’s impossible to move it, even by tractor. Can you please not leave the equipment here in the wet area? I would like to ask.

I would explain to John’s dad – the one who threw the pig feeders into the creek – that we’ll want to deal with drainage in a different way in the not so distant future, a future we envision where the pig feeders would be be a nuisance.

But realistically, my pleas probably wouldn’t have helped much. Garbage collection costs too much when you don’t earn anything and you have a lot of land to do what you want. The scrap value would not have paid for the gas to truck it. It was – and is – not only the mentality that discarded machinery was his to do with whatever he wanted, but also that the earth is abundant and resilient enough to throw, pour, pulverize and throw whatever that we desire on his lap.

But of course we cannot undo the past, only work to fix it in the present. Like most things, denying that it ever happened won’t help; the scars on the landscape or in our hearts are there whether we recognize it or not. And continuing to act in a way that continues to hurt also disregards the current status quo, where erosion is real and polluted water is a problem faced by millions of people.

So we are working to improve things, to repair, to replace the fence where we found a dead falcon stuck in the barbed wire with a more “animal friendly” fence. To properly dispose of chemicals left in the shed over the past 60 years (if there is one), to haul tires to the landfill instead of looking at them in the field.

Yet I wonder what farming would look like if farmers too adopted the old adage of doctors – “first do no harm”. What if ensuring future generations don’t have to clean up a mess was a guiding principle in agriculture? If taking care of your own brothel was the golden rule? It’s a basic principle that we should all have learned in kindergarten, but so many people don’t adhere to it in our adult lives.

As Neil Hamilton points out in his book, once each of us has finished farming and is long gone, the land remains. It could also remain metal and plastic free.

Editor’s Note: This column was originally posted by Beth Hoffman’s blog, “In the Dirt” on Substack. Remember to subscribe to support his work. For more columns from great Iowa writers, check out the Iowa Writers Collaboration.