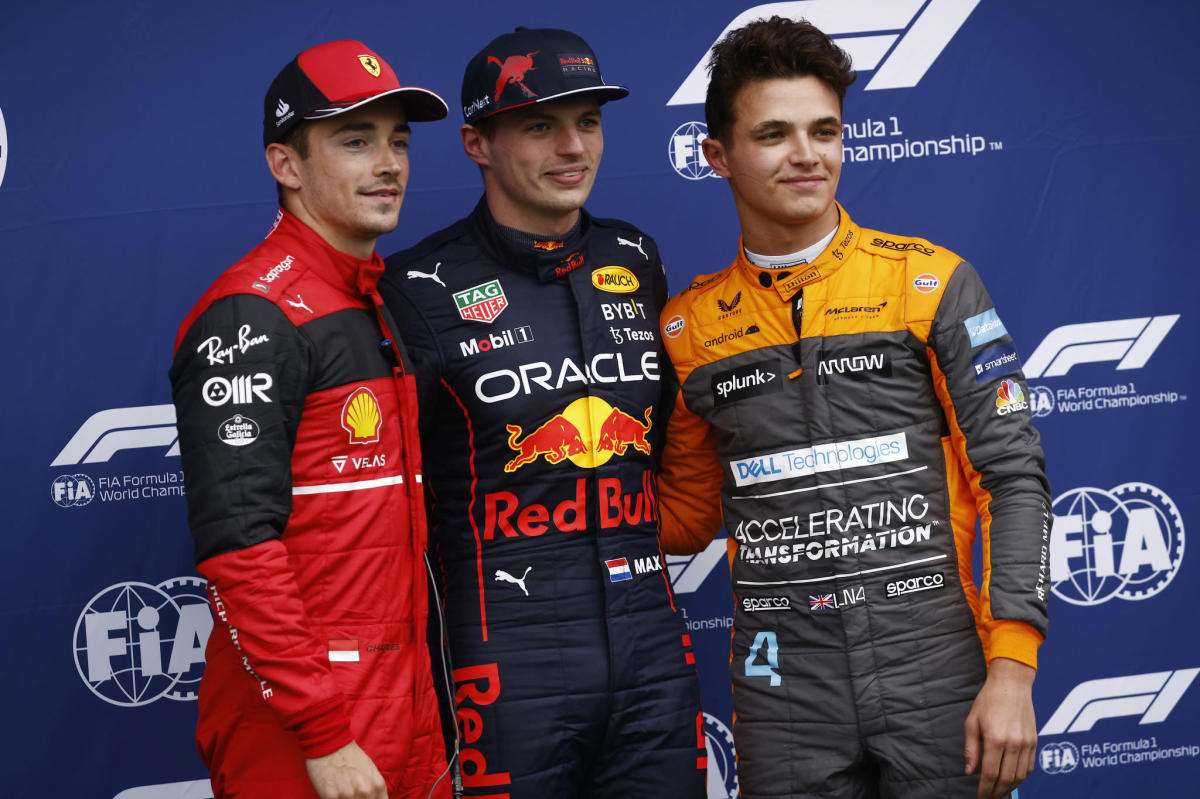 It’s a sport with the glitz, glamor and global flair of tennis and equestrian sports, but at 200 miles an hour. The growing popularity of Formula 1, particularly in the United States, has luxury brands racing to find skin in the game – throwing millions of dollars at a sport already steeped in luxury.

And this weekend, it will come to a head in Miami at the first-ever Miami Grand Prix. The new Formula 1 race, for which a special autodrome has been built, draws even more attention to the city which, with its cerulean waterways, historical excesses and exorbitant property prices, is rapidly becoming the American version of Monte Carlo . The race is seen as a ‘defining moment’ in the new era of entertainment-focused Formula 1 – and fashion eager to get involved.

Formula 1 is emerging as the most important sport of the post-pandemic era, with the kind of high-stakes opulence and energy that caters to this current, larger-than-life moment. Despite widespread inflation and economic disparities, the excitement generated by extravagant cultural events like this week’s Met Gala and even, more broadly, the rich flamboyance of K-Pop demonstrates that there is still an appetite for unbridled displays of prosperity.

There’s something ambitious and fascinating about watching star drivers like Charles LeClerc, Lewis Hamilton and Daniel Ricciardo zip around the world in private jets – an essential part of the traveling circus of Formula 1 – all to go around the world. a trail in hot pursuit of millions of dollars.

“The reality with racing is that in many ways it naturally appeals to that instant gratification and high-content culture that we have. You have the perfect recipe for drama – you have all these young guys with egos who make millions of dollars a year doing something dangerous,” Schley said.

The American expansion of Formula 1 has only just begun. The race’s viewership in the US has soared – powered by the Netflix series ‘Formula 1: Drive to Survive’, which premiered in 2019 and has since aired four seasons detailing the relationships and behind-the-scenes conflicts that happen deep in the paddocks of F1. Cable network ESPN, which exclusively broadcasts Formula 1 in the US, saw a 54% year-on-year increase in F1 viewership in 2021 and those numbers are even higher this year, with an average of around 1.3 million viewers per race in a country that remains the largest luxury market in the world.

“There’s high value because it’s one of the hottest, if not the hottest sports right now on the planet – it’s experiencing a renaissance,” said George Ciz, Tag Heuer’s chief marketing officer.

The brand sponsors the Red Bull team, which includes last year’s world champion driver Max Verstappen, and releases annual watch collections in conjunction with the team that regularly sell out. This week in Miami, he’s hosting a series of events to woo clients and spendthrift VIPs. “It’s more than a sport, it’s a cultural phenomenon. It’s really special – all the glitz and glamor that surrounds it is what gets people excited. Everyone wants to be at parties and have access to the grid,” he added.

Unlike other popular sports in Europe, including football, which have attempted American expansions with questionable success, Schley added that “Formula 1 has proliferated overnight to a level unlike anything I have seen before. It seems to have such stickiness.

The fashion involvement is endless, especially during this run in Miami. LVMH Louis Vuitton Moët Hennessy new crown award Tiffany & Co. made the race podium trophies; IWC Schaffhausen hosted a golf tournament with Hamilton and Tom Brady; and Ferrari has opened a new boutique for its F1 inspiration fashion line at the Aventura Mall among countless other brand activations such as Berluti and Ray-Ban.

Even drivers are taking the opportunity with their own fashion labels, like the efforts of LeClerc and Ricciardo, the latter also having a wine label. Seven-time world champion driver Hamilton is the first in a generation to become a household name around the world and has embraced the moment – attending fashion shows, collaborating with brands like Tommy Hilfiger and attending the Met Gala in London. last year, where he bought a table and invited a retinue of up-and-coming black designers, drawing attention to their talent.

According to fashion companies consulted by WWD, an F1 sponsorship seems to pay dividends on investment. More than other sports, F1 incorporates its sponsors’ logos in a highly visible way – displayed on the sides of the cars and on the drivers’ one-piece suits. Now, that leads to eyeballs on the right track – and months later on Netflix, in a country that has an enduring and seemingly insatiable appetite for luxury goods.

That equates to big business – more so than other racing leagues like IndyCar and NASCAR which have different positioning. Bastian Radloff, Puma’s Senior Director for Integrated Marketing in Motorsport, said that “F1 is at the heart of our business. With all these partners we have entered into licensing agreements which give us the opportunity to design and to produce motorsport lifestyle collections implementing the partners logo which is a great asset to interact with the F1 community to inspire these people to express their passion for motorsport.

At its heart, F1 is an elegant sport with a vintage quality, like the drivers’ 70s-style racing suits that recall F1’s previous golden eras and their penultimate drivers like Niki Lauda, ​​Ayrton Senna and Michael Schumacher. Luckily for brands, these suits are a key platform to show off their logos.

Tommy Hilfiger, who was in the early days of F1 sponsorship (he signed with Lotus in 1991) and continues to be present, now through the Mercedes-AMG Petronas team (including Hamilton and youngster George Russell), sees this as a huge plus and said it offers a “cool factor”.

“There are a limited number of sponsors allowed with each team and a limited number on each car. I know a lot of luxury fashion companies are trying to get in, it’s very different and very expensive now. Our fees are going up every year,” said the designer mogul, who spent COVID-19 locked down with Mercedes team principal and CEO Toto Wolff.

“We’ve done some studies and what we’ve found is that the viewership is growing every year, that’s really very beneficial. We’re a global brand and in every part of the world that hosts the race, we have a lot business – Singapore, Melbourne – all of these cities are seeing an improvement [in sales] whenever there is a race,” Hilfiger added.

Ciz added of the Tag Heuer experience, “When you live in a world full of messages and we’re bombarded all day, it’s hard to get through. Here we have an incredible opportunity. When Max [Verstappen] won the last race last season, it generated incredible interest for us and we were able to communicate around it.

This fashion element also attracts women to Formula 1 in the United States, perhaps more than in other markets.

Communications consultant Sophie Roche Conti said “the sport has this simplicity but also a carnal warmth with its drivers. I think it’s a no-brainer and it’s just very acceptable in the times we live in which are more divisive than ever – very few sports bring together traditional sports fans and the fashion world around something something that people can appreciate. I think F1 has become the new tennis, that’s how I see it. We haven’t reached the peak of growth in F1 at all.”

Parade founder and managing director Cami Téllez, a recent Formula 1 fan, had even hoped to wear a vintage John Galliano F1-themed dress at the Miami race.

Her appreciation for F1 drivers is based on “Hamilton, the undisputed star of F1 despite a difficult season, who has positioned herself as a fashion icon – sitting front row at Valentino, but often wearing contrasting prints , Off White, bold fuchsias, nylon Prada, tie-dye, and Heron Preston.I’m interested to see how his ongoing project around elevating black designers and mastering street aesthetics impacts style on the runway,” she said.

“It’s not just about the mechanics of the car, I love the connection of the male ego, but there’s camaraderie in the team,” said the New York-based stylist and designer, Emily Dawn Long, who has also recently taken an interest in Formula 1.

All of this adds intrigue to the American positioning of Formula 1, with its opulence and jet-set European provenance. In March, long before the Miami circuit debuted, Formula 1 announced it was adding another US-based race to its schedule. A new street circuit race is being designed for Las Vegas to be held in November 2023. This will bring F1’s US footprint to three, adding to its US Grand Prix longtime in Austin, Texas.

Conti, who has advised clients on F1 sponsorships, said she would recommend one to “any brand with a sports component. It’s a great opportunity that has the sensitivity and elegance to target an affluent audience.

“I think the pandemic has created an opportunity for many sports to reset and what’s interesting with that is when sport breaks new ground. F1 does it from a position of strength, it does whatever it takes to improve,” Ciz said.

For now though, all eyes are on Miami, where Formula 1 culture and sports fandom has the potential to move into new territory. As Téllez put it: “Sporting events are where the socio-cultural temperature becomes coded in fashion – will it be as formal as the Belle of the South inspired Kentucky Derby, or will it have more of the Patagonia vest-and-jeans flavor that’s plagued the Super Bowl for the past few years? It all depends on how American royalty crystallizes on the racetrack – Jeff Bezos? Meghan Markle? Karlie Kloss? We’ll find out more soon.