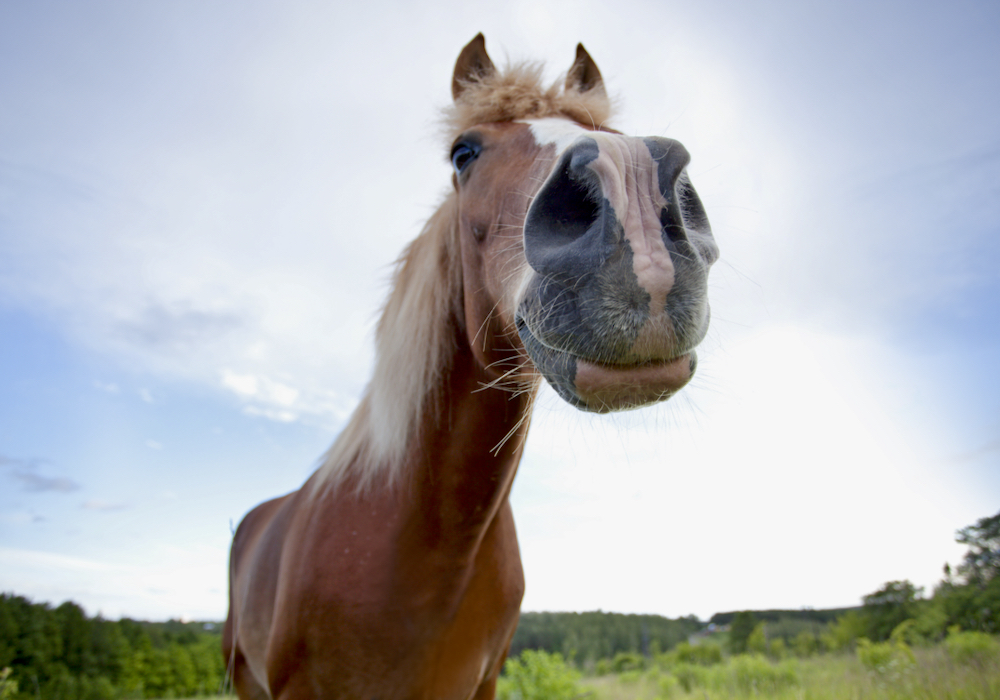 The nose knows: smell in horses

Although horses are described as one of the most insightful animals of all animals, research into the sensory abilities of equines is limited and has mainly focused on hearing and vision.

Although olfaction, or the sense of smell, has been little studied, the highly developed and sophisticated anatomy of the horse’s olfactory system with its long nose, expansive nasal and sinus cavities suggests that smell is a central sensory modality for the horse.

Additionally, the unique neurological connections of the sense of smell to and in the brain mean that this sense plays an important role in the horse’s inner world.

The sense of smell is based on the physical stimulation of hair receptor cells (hair-like) in the nasal and oral cavities by volatile chemicals. Smell is unique among the five senses because the receptor cells are themselves neurons and nerve cells with a direct connection to the brain. The tiny ciliated receptor nerve has one end in direct contact with the outside world and the other in direct contact with the brain. As such, smell is the only sense that is NOT processed in a brain structure called the thalamus before it reaches the cerebral cortex. The scent ignores the thalamus, and the information it carries goes straight to a small area of ​​the brain called the amygdala, where emotions are processed, and then to the adjacent hippocampus where learning and memory formation takes place.

This unique network of neural connections means that information received from smell is transmitted directly to higher brain centers where emotions are processed and where memory learning and training takes place. As such, the sense of smell has unparalleled power to evoke emotions, memories and influence learning. Thus, the sense of smell can become deeply associated with a certain experience.

Horses use their sense of smell to learn about their surroundings. The scent tells a story to the horse and the information it receives complements the senses of hearing and sight which are perhaps more sensitive to movement and information from a distance. The horse uses the scent to cure its curiosity and to feel safe in its environment.

Therefore, the horse’s desire to stop and sniff does not stem from disobedience, but rather the horse tries to gain more complete information about its surroundings and current situation. The information and emotions derived from scent shape the horse’s behavior both in the present moment and in preparation for future moments. It was developed in this way on purpose over millions of years. The nose has been a powerful source of information for the horse, whether it be foraging, mating, early foal-mare bonding, social interactions, or predator recognition.

Thanks to science, we now understand that individual horse hair samples have a unique profile of volatile organic compounds that imparts an odor profile to the animal. Odor profiles among horses share some degree of similarity between related individuals, indicate a degree of relatedness, and are used by horses for social recognition. Unlike the dog who often uses the rear sniff to download information about another dog, horses greet and sniff each other and in doing so perhaps convey information regarding the individual and their social consistency. This type of recognition would be seen as an evolutionary advantage in an animal that prioritizes social structure.

Odor profiles and scent are not limited to each horse. Humans also have an olfactory profile, as do harnesses, equipment, trailers, and physical structures. Odor profiles can and do affect the responses of horses, both favorably and less favorably. Italian researchers have confirmed that horses have physiological responses to specific odors found in human sweat that reflect emotions like fear and happiness. The olfactory profile left by a horse in an environment has the potential to emotionally influence the next horse in the tail. Think halters, trailers, and even human manipulators.

While the horse’s ability to sense smell is not considered as impressive as that of a dog, it begins to appear from experience in the field that the horse’s ability to smell is nonetheless impressive. In their natural environment, horses use their odor-locating abilities to search for food of choice, minerals, water, their own species, and to avoid danger. Historically, examples can be found where early settlers and indigenous peoples relied on the horse’s scent abilities to find water, warn them when danger was near, and to hunt.

This natural horse’s ability to follow an olfactory trail can be developed and cultivated through the channels of riding in olfactory work. The work of perfumes is a growing discipline in human-horse relations. The nose job is a mental challenge and activates the horse’s search system, which makes it feel good. It turns out that horses love a good game of hide and seek. The skill level of air scent detection in the horse handler team may progress to the level of employment in professional tracking services. The “professional” perfumer horse goes into odor localization mode when it receives special signals. Horses have been trained to follow airborne odors to their source, which could be a missing person or a designated target.

Since scent has a powerful emotional influence on the horse, the use of unique aromatic compounds such as essential oils can be deliberately used to enhance the emotional well-being of horses by creating “good” associations with familiar scents. and soothing. Lavender in particular has been shown to relieve high levels of stress or anxiety in horses.

Horses have a highly developed sense of smell that weaves associations and relationships in their mental and emotional landscape. An understanding of the unique neurological connection between the horse’s sense of smell, the perceptual world, and subsequent behavioral responses informs and enriches the horse and human worlds.