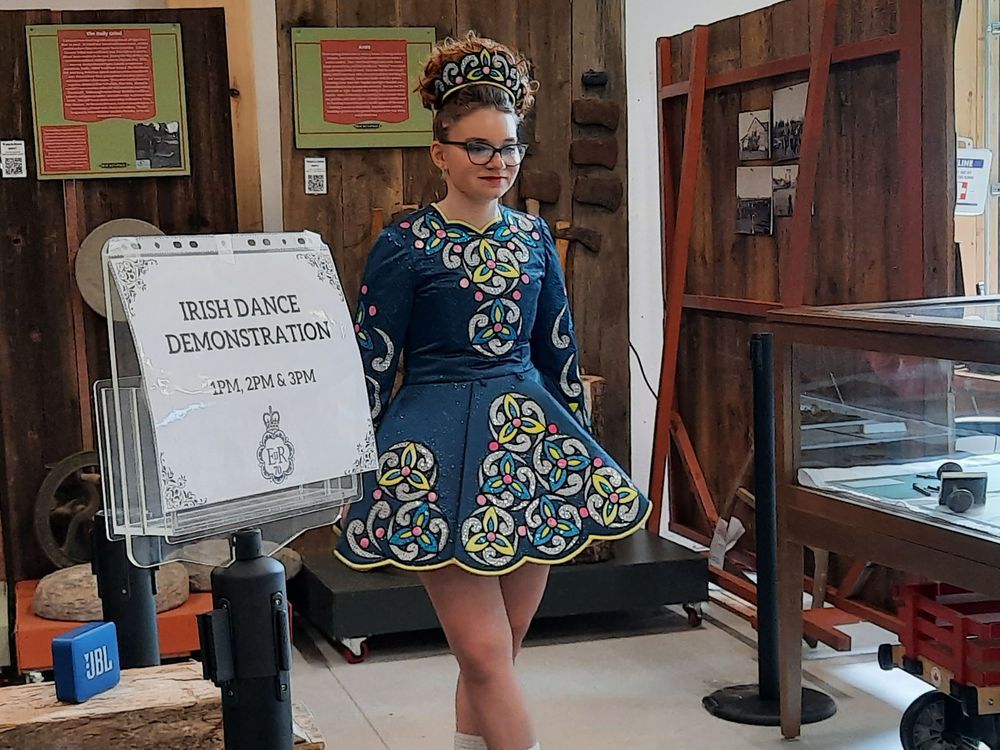 The Queen’s Jubilee marked at the Backus-Page House Museum

Queen Elizabeth’s Platinum Jubilee has not gone unnoticed at the Backus-Page House Museum.

Museum grounds on June 4 were used to mark the 70e anniversary of the monarch’s accession to the British throne, with exhibits of artefacts representing each decade of her reign and a specific tour that shed light on her life.

Shannon Carroll, event coordinator and office assistant for the museum, said funding for the event was free, thanks to federal funding.

“We were very fortunate to have been able to receive funding for this event from Canadian Heritage, which allowed us to open for free to the public,” added Carroll.

Visitors were able to take a “time tour” that began with the birth of Queen Elizabeth in April 1926, her introduction to royal duties in 1944, her service during the Second World War as a mechanic and driver, and her marriage in 1947 with Prince Philip. from Greece.

The tour also marked the birth of Prince Charles in 1948 and the Queen’s accession to the throne in February 1952 upon the death of her father, King George VI.

The section included information and recollections of Canadian air force efforts during the Second World War.

The next stop on the tour was the 1950s, which included exhibits of 1950s inventions, fashion, food, advertisements, and collectibles. Fashion included women’s hats and gloves. Inventions included the television, Swanson dinner shows, hula hoops, the Barbie doll, and the Tang orange drink.

The exhibit included a 1947 television, coronation memorabilia – such as sets of cups and saucers, and a 1954 Cadillac Series 62.

In 1952, Princess Elizabeth II and Prince Philip (Duke and Duchess of Edinburgh) made their first visit to Canada on behalf of the ailing King. They attended a Leafs game in Toronto, and also attended a barn dance and tree planting at Rideau Hall, as well as a trip to the Niagara Falls tunnels.

In 1953, Queen Elizabeth II addressed the United Nations in her first televised address and appointed Philip to her Canadian Privy Council, as well as the opening of the 23rd Canadian Parliament.

The “Swinging Sixties” exhibit included a record player with a strong focus on records and music. The records on display included iconic bands such as the Beatles and the Monkees.

In 1964, the Queen and Prince Phillips came to celebrate the centenary of the Confederation Conference.

Queen Elizabeth II and Prince Phillip celebrated the centennial of the Northwest Territories, and in 1971 Queen Elizabeth II and Princess Anne celebrated the centennial of British Columbia’s entry into Confederation. Prince Charles, Prince Andrew, Prince Edward, Prince Phillip and the Queen came to Montreal for the 1976 Olympic Games in Montreal. Princess Anne competed as part of the British Equestrian Team.

The Queen and Prince Phillip opened the 30th session of the Canadian Parliament and attended an interfaith Sunday service on Parliament Hill in 1977.

Locally, the landmark 1970s saw the opening of the St. Thomas Elgin Library, a heist at the Wardsville branch of the Bank of Montreal, a stop at the Royal Brothers Circus in West Lorne, the celebration of its 50th anniversary in United Brethren Evangelical Church in Rodney. .

In 1980, Queen Elizabeth II made history as the first British monarch to pay a state visit to the Vatican.

Locally, the West Lorne Home Hardware opened, a new emergency room was added to the Four Counties Hospital, the West Lorne flag was designed, the general store in Clachan was demolished, the Olympic flame was crossed Eagle and West Elgin Mutual opened an office in Rodney. .

The 1990s marked the death of Princess Diana in 1997, the golden wedding anniversary of Queen Elizabeth II and Prince Phillip also in 1997, and the Queen’s Ruby Jubilee (40 years) as British monarch.

Meanwhile, the Queen toured Canada to celebrate the 125th anniversary of Canadian Confederation and its Ruby Jubilee in 1992.

The Queen also unveiled an equestrian statue of herself opposite that of Queen Victoria, as well as two stained glass windows at Rideau Hall commemorating her Ruby Jubilee and the 40e anniversary of the appointment of Canada’s first Canadian-born Governor General.

In 1994, the Queen and Prince Phillip opened the Commonwealth Games, and in 1997 they celebrated the 500th anniversary of the discovery of Newfoundland.

The years 2000, 2010 and 2020 have been grouped together in the same showcase for this event. Royal events included the Queen celebrating her Golden Jubilee in 2002 and her 80th birthday in 2006.

The wedding of Prince William and Catherine took place in 2011.

The Queen celebrated her Diamond Jubilee in 2012 and opened the London Olympics the same year.

Prince Philip died in April 2021, while the Queen celebrated her 95th birthday that same month.

In addition to the decade’s exhibits, the June 4 event included a cake-cutting ceremony, activities such as crossword puzzles and coloring pages relating to the Queen, and an Irish dancing demonstration by Destiny Vickers, a world champion Irish dancer, in the new agricultural centre. .

“With Queen Elizabeth being the head of state in Northern Ireland, as in Canada, we wanted to show a connection between the historically Irish roots of the colonies and the celebration of today,” Carroll said of the Irish dance.

The day also saw a raffle for vintage toys and snacks, won by R. Bell.

The new generation of women competing in Mexican rodeos