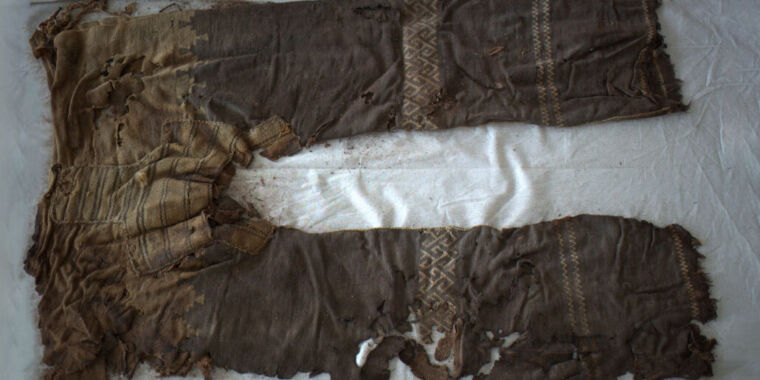 The world’s oldest pants are a 3,000-year-old marvel of engineering

With the help of an expert weaver, archaeologists have unlocked the design secrets of the world’s oldest trousers. The 3,000-year-old woolen pants belonged to a man buried between 1000 and 1200 BCE in western China. To make them, ancient weavers combined four different techniques to create a garment specifically designed for combat on horseback, with flexibility in some places and toughness in others.

The soft side of materials science

Most of us don’t think much about pants these days, except to lament that we have to put them on in the morning. But the pants were actually a technological breakthrough. Shepherds and warriors on horseback needed their leg covers to be flexible enough to allow the wearer to swing one leg over a horse without tearing the fabric or feeling constricted. At the same time, they needed additional reinforcements in crucial areas like the knees. It has become, to some extent, a materials science problem. Where do you want something elastic and where do you want something solid? And how do you make a fabric that will accomplish both?

For the makers of the world’s oldest trousers, made in China around 3,000 years ago, the answer was apparently to use different weaving techniques to produce a fabric with specific properties in certain areas, despite the weaving of the garment from the same spun wool fibre.

The oldest known trousers in the world were part of the funeral garb of a warrior now called Turfan Man. He wore the woven woolen trousers with a poncho belted around the waist, ankle boots and a woolen headband adorned with shells and bronze discs. The basic design of the pants is surprisingly similar to the pants most of us wear today, but closer inspection reveals the level of engineering that went into their design.

Together with his colleagues, archaeologist Mayke Wagner from the German Archaeological Institute recently examined the 3,000-year-old pants in detail. A modern weaver created a replica of the pants to better understand the techniques that produced this piece of fashion history.

Spacious where it counts

Most pants are woven in what’s called twill, which you might recognize if you’ve ever put on jeans. The oldest known twill fabric in the world comes from the Hallstatt salt mine in Austria, and it has been radiocarbon dated to slightly earlier than trousers, to between 3,500 and 3,200 years ago. Twill creates a thick, diagonally ribbed fabric that also has more stretch than the original wool yarn.

Based on the other items in his grave, which included a hatchet, bridle, and horse bit, Turfan Man likely spent a significant portion of his time fighting on horseback, so the stretch twill fabric would have saved him the embarrassment of ripping his pants off every time he got into the saddle. For more space, the old weaver widened the crotch of the pants in the center compared to the ends, so that the piece of fabric could fold over or stretch in the middle to give the wearer more flexibility where it should. really mattered.