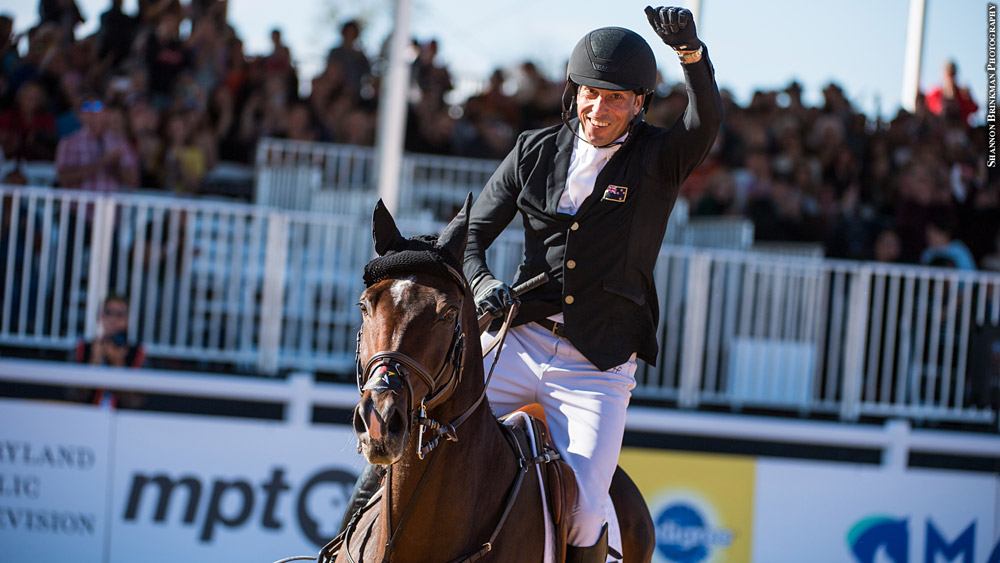 Olympic veterans and first-time 5-Star horses from three countries were the ones to beat for the 2022 MARS Maryland 5 Star Show Jumping Finals at Fair Hill presented by Brown Advisory. In the end, world No. 1 Tim Price (NZL) jumped clear aboard Coup De Coeur Dudevin, the 10-year-old Selle Français stallion of Jean-Louis Stauffer, to take the honours, finishing with a score of 28 ,2.

Like Price, second place Tamie Smith (USA) only added time faults to her score aboard Ruth Bley’s 13-year-old Hanoverian gelding, Danito, but her final score of 29.8 kept them at just 0.1 ahead of world number 3 Oliver Townend (GBR). Townend finished in third place with his dressage score of 29.9, riding John Peace’s 11-year-old Spanish gelding, As Is, through one of five clear rounds on Sunday.

The 5-Star MARS Maryland at Fair Hill presented by Brown Advisory, one of only two 5-Star level equestrian events of its kind in the United States and only the seventh in the world, has returned to the Special Events Zone of Fair Hill in Cecil County, MD for its thrilling second edition October 13-16. The event’s prestigious 5-star (CCI5*-L) designation is the pinnacle of the Olympic sport of eventing, often described as an equestrian triathlon.

In addition to the 5 star contest (CCI5-L), the event also featured a 3-star competition (CCI3-L), which served as the USEF CCI3*-L All-Around National Championship, and the Dutta Corp Championships. USEA Young Event Horse East Coast presented by Dubarry of Ireland.

Course designer Ken Krome (USA) presented 5-star MARS Maryland competitors with a challenging 16-effort, 1.30m course, but rookie horses Price, Smith and Townend answered all the questions to get them up on the podium.

Not far behind them were Americans Phillip Dutton and Jennie Brannigan, who completed the top five thanks to their double clear rounds. Dutton rode Olympic partner Tokyo Z to fourth place with their dressage score of 30.5; Brannigan moved up to fifth place thanks to her dressage score of 31.5 aboard Nina and Tim Gardner’s FE Lifestyle.

“I’m very proud of Coup De Coeur Dudevin,” Price said. “I actually think these three top horses are amazing. It’s exciting for the sport, it’s exciting for us personally, and it’s so unexpected to have such a result. I came hoping that this horse would put me in the top five, but I expected there were a few things that showed his lack of experience. Fortunately, we were able to do it while keeping a good low score. I thought that he was doing quite well.

“For my round, there was a lot of pressure,” he added. “But you stay focused on the job. Building the pace before the start was the most important part. Then I just tried to give it a good spin and stick to the plan. If I was going to execute plan B, I had to do it fast and well. He has a really long stride, which was more evident today than in some of the other show jumping events I’ve had, but he really turned around for me. He really impressed me and I’m very excited about him.

“It hasn’t been the fairy tale year you might think,” said Smith, who won a team silver medal at the FEI Eventing World Championships in September. “Long story short, California in my area got infected with EHV this winter. I got out of there just before and went east but quickly broke my ankle and tore all the ligaments it contained. I could just watch my dreams fade away. I didn’t think I would be in contention for the world championships, but I wouldn’t take a turn down either.

“These guys are legends in the sport, and it’s an honor to be here with them,” she added of her fellow podium finishers. “The first three months of 2022 have been a disaster for me. My horse had broken his withers on top of everything else, so having the fall season I’ve had since Pratoni has been really special. I have a huge, wonderful support team, and I know we’re all thrilled with this accomplishment.

“I’m obviously delighted with him,” Townend said. “It belongs to my new job in Caunton with the Peace family. This is the first time I’ve had a job since I was 21, so delivering these results to people who are employing me for the first time this year is really special to me. It’s been a different year for me with so many behind the scenes at Caunton, but one that’s been so, so positive.

“As Is was bought earlier this year, and for us to deliver the result we thought it was capable of is incredible,” he continued. “You never know with a new horse and a 5 star; everything can happen. He came out a little green yesterday, and I thought last night, ‘Let’s hope he’s as careful in the show jumping, and we’ll be fine.’ To know that I was on such a good jumper, it was up to me to press the right buttons and get the right distances. It’s really exciting to have a horse of this caliber.

Finishing on their dressage score of 26.4, Elisa Wallace (USA) and Renkum Corsair won the 2022 USEF CCI3*-L National Eventing Championship. Wallace and the 12-year-old Corsair Syndicate Anglo-European gelding took the second place overnight with no room for error, but that pressure didn’t stop them from competing in one of only nine clear show jumping events.

“I knew how the course was going since I had my first horse, Let It Be Lee, in there,” Wallace said. “And having raced last year, I knew it could be a tough requirement. It’s tight and a very jumpy course. I had a lot of confidence going in with Renkum Corsair; he did show jumping at 1.45m at the age of 7, and he really helped me gain confidence in show jumping. I just pretended it was a jump ride at the (World Equestrian Center).

“He felt fantastic,” she added. “He didn’t feel affected at all by (the cross) the day before. He jumped a nice round, and it was pretty fun to be in there. I am truly ecstatic and couldn’t be more grateful to my owners in the union. The horse is just a really, really cool horse. He’s just getting stronger and stronger, and I feel like there’s a lot more to come from him.

Ken Krome’s twisty 1.20m track with 14 jumping efforts proved to be very influential in the 3-star. Second place Jenny Caras (USA) moved up nine places from her overnight position in 11th thanks to her double clear aboard her and Jerry Hollis’ 10-year-old Mecklenburg gelding, Sommersby. The pair finished on their dressage score of 29.9.

“I didn’t think I would go all the way to the reserve championship title,” Caras said. “I just knew I had to come in and pop my sleeve. My horse had all the skills to do a clear round, so that was all I could do. I came here wanting to finish this event on our dressage score, and we achieved that goal. I couldn’t be more proud of him.

“I was talking to the owners after my tour and I had friends texting me saying ‘You go up, you go up,'” she added. “And I just said, ‘I’m not going to win. If I could even make it to the top five, that would be fantastic. I’m so excited to be here second now.

Despite falling off a rail at obstacle #10A of the penultimate combination, Cassie Sanger (USA) and Fernhill Zoro held on overnight to finish third with a score of 30.6. At just 18, Sanger also won Best Young Rider and Best Debutante awards for her success in her first CCI3*-L aboard Nina Sanger’s 14-year-old Anglo-European gelding.

“I remember at the start of this season we were talking about the plans for my horses,” Sanger said. “I’ve been riding Fernhill Zoro for less than a year, and I said to my trainer, ‘I really want to go to Fair Hill.’ She wasn’t so sure, but we continued to move forward and solidify my partnerships with each of my horses. It couldn’t have worked better. Horseback riding is such a difficult sport; I wish I could have do better and I’m already thinking about what to improve, but I would definitely say it was a successful year.

“Thank you to all of our sponsors for making this event possible, especially MARS Equestrian™ and Brown Advisory for becoming our Premier and Premier Sponsors,” said Jeff Newman, President and CEO of the Maryland 5 Star Committee. “Thank you to the riders and FEI officials who came from all over the world to organize this event, to the staff and volunteers who worked tirelessly to make it take off, and to all the fans who gave us incredible support this We had a spectacular second event and we hope everyone will visit Fair Hill and Cecil County for years and years to come.