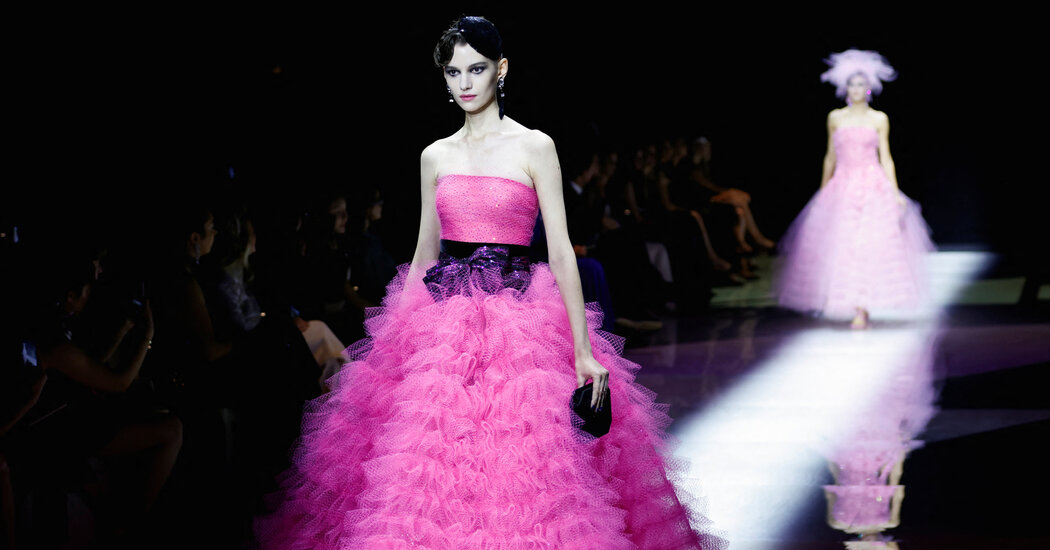 PARIS — These days, it’s hard to see a bright pink outfit and not think, “Barbie!”

Images from the film by Greta Gerwig, currently filming with Margot Robbie and Ryan Gosling (among others), have become the hit of the summer on social media – filled with plastic postmodern perfection and a potential revisionist narrative for the doll who codified gender stereotypes in a quazillion childhoods. After all, if ever a movie was ripe to shape fashion it would be this one, especially now when all that’s available are a few shots of the stars dressed in neon looking mostly like crazy, clever fun.

But that’s probably not what was going through Giorgio Armani’s head when he put on a series of around 10 candy pink looks in the middle of his Privé show – although if there are trend roundups ( and you can bet there will be), these will probably get swept away in the net. Mr. Armani’s Hollywood reference book is less pop culture and more silver screen glamour; back to the time of champagne toasts and starry nights, a reminder of another tradition. One where Kay Thompson shouted “Think pink!” in “Funny Face”, rather than Mattel.

That’s what Mr. Armani provided, at any rate, during his first couture show in two years, which was effectively a tour through his own greatest hits – the ones that transformed the red carpet at home. era – with liquid suits in black and silver velvet, his Chinoiserie jacquards and an entire nightclub of beaded shimmer dresses (he actually called the collection Pétillant, French for sparkling). He even built a replica of the theater in his Milan headquarters for the evening in the middle of the Salle Pleyel concert hall on rue du Faubourg Saint-Honoré, complete with white-cushioned stadium seats.

After the pink period, which included a loofah-like evening cape and billowing sequined pantsuit, came a moody blue, all draped in fringe, wrapped in satin peplums, bristling with ruffles and shimmering under the lights. In the end, a single white look emerged in the form of a beaded t-shirt with a matching vest over flowing silk pants, as a punctuation mark for an era.

It was full of gravity and glitz, but lacked a sense of fun. Even in couture, which can feel heavy with money and the responsibility of maintaining a tradition of craftsmanship, it’s a necessary ingredient.

See, for example, the constructivist soft-sculpture creations that artist Xavier Veilhan imagined for the entrance to the Chanel show: a series of enormous blocks, arches and baby-pink spinning tops that transformed the equestrian center in the Bois de Boulogne into something of a giant sandbox and set the scene for what turned out to be one of designer Virginie Viard’s lightest collections. One that delves into the traditions of the house without too much effort.

Gone are the cool ’80s references she’s favored since taking over the house; instead, Ms. Viard was simply toying within Chanel’s domains, offering loose, long silhouettes ranging from narrow little shoulder to mid-calf skirt in variations of the brand’s signature bouclé, often paired with boots and hats that had just the hint of cowboy about them. Mixed with metallic floral-print tea dresses (including one, yes, pink) and tulle A-line dresses, they looked chic and understated without being stiff.

Or see Julien Dossena’s ultimate plastic-fantasy vision at Paco Rabanne, one of the clusters of brands (including Alaïa and Patou – the latter also featured lots of LPDs, or little pink dresses) that acted as a sort of opening act for sewing.

Using latex, chainmail, PVC and lace, Mr. Dossena filtered the brand founder’s futuristic vision through a dystopian lens to create a fetish show of slipdresses and grunge grounded in heavy leather boots. combat and surmounted by babushka scarves. Some dresses looked like armored tutus, others looked like they had been molded from molten Play-Doh. The materiality of the clothes was essential, but so was the propulsive energy.

If Barbie participated in “The Hunger Games”, this is what she could wear.