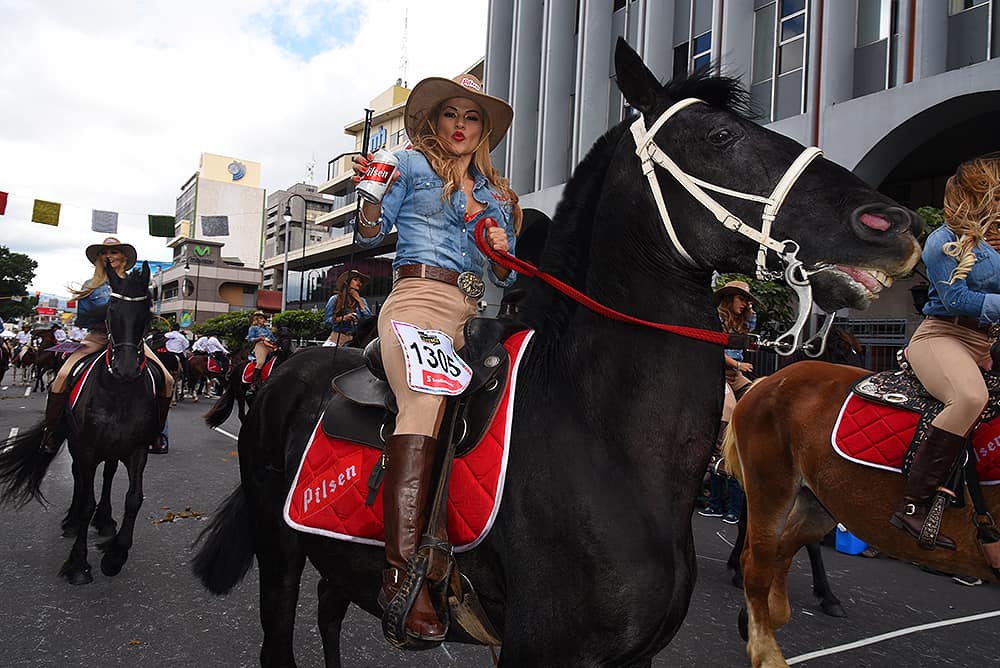 El Tope is a traditional Costa Rican festival celebrating their history and culture. It is an equestrian parade which is often part of local festivals. The largest of these celebrations takes place in the capital, San JosÃ©, and is known as El Gran Tope Nacional.

We’ll take a look at El Tope in Costa Rica, what this traditional event has to offer, and some of the history behind it.

What is El Tope?

El Tope is a parade of horses, many of which take place in different towns in Costa Rica throughout the year. It is a great opportunity for these different cities and regions to promote and show their skills in equestrian dressage.

Horses are an important part of the culture in Costa Rica, and El Tope celebrates it. It is a way of linking the present to the colonial past, a time when the majority of the population lived in the countryside and depended on horses.

In addition to the parading horses, you will see beautifully painted carts, horse drawn carriages and marching bands. You can also expect to eat and drink, dance, and even flirt.

What does El Tope famous?

El Tope is a celebration and National Rider Day in Costa Rica. In the past, many Costa Rican families worked the land, owned farms, and depended on horses for their livelihood. From there was born a tradition of “sabaneros”, a kind of Costa Rican cowboy.

El Tope Nacional Costa Rica attracts thousands of riders from all over the country. This is the opportunity to show riding skills, majestic horses and sabanero outfits.

Horses are trained to perform special steps, almost like a dance, to entertain the crowds gathered along the streets. Thousands of spectators converge on the road to San JosÃ©; and beyond. If you are planning to attend the event, you will need to get there early in the day to find a good position. If you want to be at the front, you might even have to arrive at dawn.

On the day of the parade, the streets around the parade route are closed. At 1 p.m., the parade begins its 6 km route through Paseo Colon and Avenida Segunda. Loud music is played during the event and everything is captured by cameras and broadcast on television.

The tradition of Paso Finos lies in the extraordinary and spectacular Spanish dance steps performed by horses and riders. The Sabaneros will work with their horses to perform incredible tricks that will thrill the crowds.

To put on a show like this, a great amount of practice is required and the practice takes place year round. The result of this hard work captivates the public that marks the course as well as the viewers.

As you can imagine in a parade like this, attendees want to wear their fanciest clothes. This includes the sabaneros, who make sure to wear their best cowboy outfits.

The tradition of really dressing for the parade is important across the country, but is particularly visible to El Tope Nacional. During this important traditional occasion, everyone wants to look their best.

While this may not have been the case originally, women now play a significant role in the parade, with many straddling alongside the men. Of course, these cowgirls or sabaneras also want to look their best for the crowd. This has led to an informal competition among the participants over who can impress the audience the most.

Ox-carts are part of the tradition of El Tope parades. These are not just ordinary carts, they are decoratively and colorfully hand painted by local artisans. The owners take them through the streets to show off their beauty to the crowd that awaits them.

The story of El Tope

There are several explanations for the birth of this festival. One account, perhaps the most likely, is the one that followed the earthquake that struck San JosÃ©. in 1871, money was needed to repair the damage. The Metropolitan Cathedral was destroyed, so the Catholic Church decided to organize events in nearby towns to raise funds to rebuild it.

The surrounding towns take turns to organize fairs, with the profits going to finance the construction effort. These fairs are still often called “turnos” or towers, even if the money collected is no longer used to rebuild the cathedral.

As a result of these fairs, the profits should be transferred to San JosÃ©. The money would be carried by some of the most important men in town, and they would be greeted halfway by men from San JosÃ©. Both groups of men would use their best horses for this task.

Ox-drawn carts would also be used to transport materials for the construction effort, this could include stone, wood and paint. These carts would follow the horses in a procession that would arrive in San JosÃ©. Some of the best Costa Rican horses would lead this parade through town. After the completion of the cathedral, the tradition of the parade continued.

Another explanation for this tradition says that it started in colonial times as a horse racing event. A horse race kicked off the Fiestas de San Juan, an annual bullfighting and horse racing competition. People attended to watch the fastest horses and the best jockeys compete. It would have evolved over the years to become El Tope.

Another explanation suggests that the tradition began in the 20th century thanks to the United Fruit Company. To service Costa Rica’s banana plantations, the United Fruit Company imported livestock. When the cattle arrived on the ships, horsemen were sent to the ports to collect the cattle and lead them to the plantations. From there was born the idea of â€‹â€‹a national parade.

Whatever the true origin story of El Tope, this is a fascinating spectacular unique to Costa Rica.